BOSTON — Felix Doubront walked off the mound in the fifth inning of Tuesday?s start against the Toronto Blue Jays at Fenway Park. The Red Sox later announced that the left-hander’s exit stemmed from left shoulder fatigue.

Doubront got knocked around for four-plus innings. He surrendered back-to-back doubles to Jose Reyes and Melky Cabrera to open the fifth inning, prompting a visit from manager John Farrell, who soon signaled to the dugout for the team?s trainers.

Doubront’s fastball maxed out at 88 mph — well below his 92 mph season average — in the fifth inning. That evidently caused some concern and eventually led to his departure after 65 pitches (40 strikes).

Edward Mujica replaced Doubront and allowed both inherited runners to score. Doubront was charged with five earned runs on five hits, including two home runs, in his four-plus innings. The lefty walked two and struck out three as his ERA raised to 5.12. 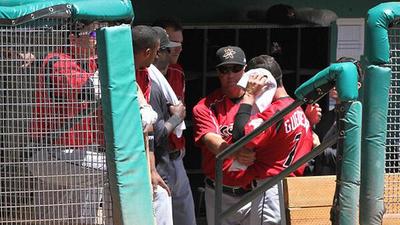