The least important aspect of the United States’ 2-1 victory over Turkey was the result itself.

Turkey administered the United States’ first real test in its 2014 FIFA World Cup preparations on Sunday, and the Americans passed — although not with flying colors.

As Jurgen Klinsmann said at halftime, USA-Turkey was the real benchmark for where the United States men’s national team stands two weeks ahead of its all-important first World Cup game against Ghana. The final score reveals little, but the performance was telling.

Here are some things we learned:

At halftime, Klinsmann replaced Jones with Kyle Beckerman and deployed Michael Bradley next to him. The switch to the more familiar 4-2-3-1 formation stabilized the middle and forced Turkey to attack the wide areas. But the tactical change subdued Bradley and the U.S. went with a more direct approach in the second period.

Matchups and game situations will dictate which formation Klinsmann uses. If it wasn’t apparent before, Klinsmann now knows that the U.S. can’t use a midfield diamond at all times in Brazil.

The defense remains a work in progress
Klinsmann is building a new defense on the fly, and it’s obvious that Geoff Cameron, Matt Besler, Fabian Johnson and Tim Chandler haven’t gelled yet. It looks like Besler and Cameron are Klinsmann’s first-choice center backs. Sunday’s game was only their time playing together and their first with Johnson and Chandler on the right and left fullback spots, respectively.

The back line failed to operate as a unit throughout the first half — seemingly due to communication issues — as the Turks flooded forward. Turkey should have capitalized on mistakes with one or two goals in the first 45 minutes. The back four must improve, and it starts in the middle.

Fullbacks will be key
Fullbacks will play an important role in Team USA’s success or failure. Both U.S. goals against Turkey came as a result of fullbacks’ work in the final third of the field. Johnson and Chandler have the speed and quality to create scoring opportunities, and Klinsmann is expecting them to cover a lot of ground, provide width and serve as more than a safety valve for under-pressure midfielders. The same goes for DaMarcus Beasley and DeAndre Yedlin.

But the United States’ fate also will hinge on how they defend. Chandler was caught out of position in the build-up to Turkey’s goal and on other occasions. Johnson’s attacking instincts could consign him to a similar fate, especially against counter-attacks.

The U.S. showed plenty of belief, ambition and versatility when attacking Turkey. The Americans must also mark tighter, tackle tougher and better maintain their shape in the coming weeks.

The warm-up to the warm-up is out of the way, as is the warm-up itself. The games will only get harder from here, and performances must improve by striking a more perfect balance between attack and defense. 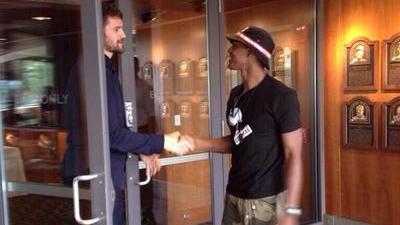