BOSTON — Red Sox outfielder Jackie Bradley Jr. should be a front-runner for a Gold Glove in the American League. The reality is he probably won?t be given a second look without continued offensive improvement.

Bradley keeps showing that he?s already an elite defensive center fielder. He?s deserving of strong Gold Glove consideration this season, though history has shown that offense often plays a factor in who ultimately wins the award.

Defensive metrics support Bradley?s candidacy. The 24-year-old entered Sunday?s game against the Kansas City Royals at Fenway Park with the best Ultimate Zone Rating (12.5) and UZR/150 (25.2) among all Major League Baseball center fielders. Both stats are an attempt to quantify how many runs a player saved or gave up through their fielding prowess, with the latter figure being scaled to a 150-game basis.

A UZR of 15 is considered ?Gold Glove caliber? and a UZR of 10 is considered ?Great,? according to FanGraphs? shorthand scale. Only Cincinnati?s Billy Hamilton (11.6) is close to Bradley among center fielders, as the third-best mark among big league center fielders belongs to Tampa Bay?s Desmond Jennings at 5.0.

Bradley’s throwing arm is equally as stellar. His 5.2 ARM rating — which seeks to highlight an outfielder?s impact in holding or throwing out runners — grades just behind Leonys Martin?s top mark (6.3) among center fielders. Bradley?s 11 outfield assists are tops among all MLB center fielders and second only to Oakland Athletics left fielder Yoenis Cespedes (12) among all outfielders.

The real differentiator when it comes to Bradley, however, is the incredible instincts he shows, whether it be in his route-running or his overall defensive IQ. Bradley doesn’t show up on highlight reels as much as some other players because he makes everything look easy.

Bradley?s intelligence again was on display in Saturday?s win, when he baited Kansas City?s Jarrod Dyson, who was stationed at first base, into a double play by initially acting as if he lost Omar Infante?s line drive. Bradley has been involved in six double plays this season, which is the most among all outfielders by a wide margin and the most by a rookie outfielder since J.D. Drew?s six-pack back in 1999.

“I’m just trying to fly under the radar, mind my own business,” Bradley said after Saturday?s game. “That’s the thing about the league. Everybody learns very fast and has video. It’s one of those things where you kind of want them to take chances to give you a chance to make a play, but then it’s one of those things where, if they see it, they won’t take as many chances.?

The question this season is whether Gold Glove voters (the managers and coaches in each league) will recognize the rookie for his stellar glove work. After all, the award comes with a reputation of favoring big offensive contributors over light-hitting counterparts, particularly if it?s a toss-up from a defensive standpoint. And while Bradley has looked much better at the plate of late, he?s still hitting .227 with a .303 on-base percentage going into Sunday?s game.

“I don?t know if he gets the recognition or not, but we?ve seen it many times where he?s got a strong, accurate arm,” Red Sox manager John Farrell said Saturday. “He?s got a lot of confidence and, more than anything, the accuracy has improved as the year has gone on.?

Bradley?s defensive prowess hasn?t gone unnoticed in Boston. It shouldn?t go unnoticed across the league for much longer, either.

Rory McIlroy Calls Out Heckler At British Open, Has Him Ejected (Video) 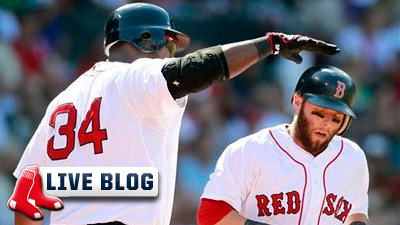