BOSTON — The Red Sox knew they were in for a long day Saturday. They didn’t expect another one Sunday.

One day after squaring off in a day-night doubleheader, the Sox and Baltimore Orioles treated fans to a five-hour, five-minute affair at Fenway Park, with the Orioles eventually emerging victorious by a score of 7-6 in 12 innings.

The Orioles looked to have the game sewn up when they roughed up relievers Burke Badenhop and Junichi Tazawa for four runs in the top of the seventh, but the Red Sox responded with five runs of their own in the bottom of the frame to tie the game at 6-6. That score remained until the 12th, when O’s left fielder David Lough tripled off Edward Mujica and came home on a J.J. Hardy single.

— Jake Peavy’s battle for win No. 2 rages on. The veteran right-hander tossed six solid innings, allowing six hits and two runs (one earned), but again was robbed of a victory as the Red Sox’s offense waited until after the conclusion of his outing to get going. Peavy, whose lone victory this season came way back on April 25, now has gone 13 consecutive starts without a W, with the Sox posting a 2-11 record in those games.

— Jackie Bradley Jr. continued to play a stellar center field, making a number of nice reads early in the game and nailing Manny Machado at the plate to complete an inning-ending double play in the seventh. Bradley foiled Machado again in the ninth, ranging back to the wall in straightaway center and leaping to rob his fellow phenom with the potential go-ahead run on first base.

“That’s always what I want to do,” Bradley said. “Help out the pitchers as much as possible and show them that I’m willing to give up my body in order to make a play for them.”

Bradley’s 10 outfield assists are tied for the major league lead, and his five double plays are the most by a rookie center fielder since J.D. Drew had six in 1999.

The 24-year-old also had himself a fine afternoon at the plate, going 2-for-4 with a walk and a run scored.

“The extra work that he’s doing is starting to pay off,” manager John Farrell said. “He’s starting to reproduce a more consistent swing path, using the whole field. … He’s in a pretty good place confidence-wise. A couple of really key defensive plays today with the catch up against the wall, throws another guy out at home plate. He’s been playing with much more confidence probably over the last two or three weeks.”

— While the Red Sox’s Nos. 5 and 6 hitters put up some seriously underwhelming offensive numbers — Mike Napoli and Stephen Drew combined to go 1-for-11 with eight strikeouts — the batters ahead of them swung the bat very well. Dustin Pedroia finished with three hits, and David Ortiz went 4-for-5 with a walk and two RBIs.

Ortiz’s double in the fourth inning was his 1,708th hit in a Red Sox uniform, moving him past Harry Hooper for seventh on the team’s all-time list.

— Third base coach Brian Butterfield was ejected in the seventh inning for arguing with second base umpire Hunter Wendelstedt. Bradley said Butterfield’s tossing helped energize the Red Sox, who were trailing by four runs at the time.

“The spark was Butter,” Bradley said. 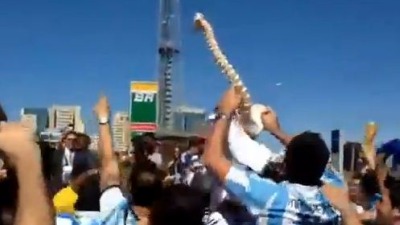