Final, Angels 2-0: Break out the brooms.

Jason Grilli worked a 1-2-3 ninth inning to finish off the Angels’ four-game sweep of the Red Sox at Fenway Park.

Angels starter Matt Shoemaker dazzled for 7 2/3 shutout innings. He allowed just one hit — a two-out double by Will Middlebrooks in the seventh inning — while striking out nine. Middlebrooks’ double was Boston’s only hit of the contest.

The Red Sox will welcome the Seattle Mariners to town for three games beginning Friday. Joe Kelly is scheduled to face Felix Hernandez in the series opener.

Christian Vazquez had another opportunity to show off his arm. Mike Trout attempted to steal second base after walking with one out. Vazquez said, “No way, Jose!”

Mujica retired Efren Navarro on a ground ball to the right side after Vazquez threw out Trout.

The top of the Red Sox’s order — Brock Holt, Dustin Pedroia and Daniel Nava — is due up in the bottom of the ninth.

End 8th, Angels 2-0: The Red Sox will have some work to do in the ninth inning.

Matt Shoemaker, who pitched brilliantly, struck out Kelly Johnson and Xander Bogaerts to begin the bottom of the eighth inning.

Shoemaker issued a two-out walk to Mookie Betts, which ended the right-hander’s evening after 7 2/3 tremendous innings.

Shoemaker allowed just one hit over his 7 2/3 shutout frames. He struck out nine, walked one and threw 116 pitches (79 strikes).

Edward Mujica will pitch the ninth inning for Boston.

Mid 8th, Angels 2-0: Junichi Tazawa kept Boston’s deficit at two runs. But it was no walk in the park.

Tommy Layne, who recorded the final out of the seventh inning, came back out to face the left-handed-hitting Josh Hamilton. Hamilton grounded to third base for the first out.

Tazawa, who it seems like has thrown about a million innings dating back to last season, struck out Howie Kendrick for out No. 2.

Trouble surfaced when Taz walked David Freese, who then was lifted for a pinch-runner in John McDonald.

Erick Aybar drilled a screamer back up the middle that deflected off Tazawa’s glove and into center field. Chris Iannetta worked a walk to load the bases.

Tazawa escaped the inning by striking out Collin Cowgill.

Will Middlebrooks broke up Matt Shoemaker’s bid for a no-hitter with two outs in the seventh inning. Middlebrooks, batting all of .193, ripped a double into the left field corner.

Shoemaker, to his credit, ensured things didn’t unravel. He retired Allen Craig on a ground ball to third base to end the inning.

Mid 7th, Angels 2-0: The Angels increased their lead in the seventh.

Rubby De La Rosa’s night ended after Los Angeles pushed across its second run of the ballgame on a sacrifice fly.

Erick Aybar led off with a sinking line drive down the right field line. It dropped on the warning track and kicked up into the seats for a ground-rule double.

Kole Calhoun hit a fly ball to left field that sent Daniel Nava back a couple of steps. Aybar easily raced home after Nava made the grab.

The Red Sox still are looking for their first hit.

End 6th, Angels 1-0: Now that things have settled down a bit, we should mention that Shoemaker is still dealing.

Betts and Vazquez grounded out, and Holt went down swinging to keep the Red Sox hitless through six.

Mid 6th, Angels 1-0: The Angels sure were unhappy about something in that inning. It’s just not clear what it was.

Albert Pujols struck out swinging and Hamilton flied out to right, after which Angels manager Mike Scioscia came out to argue … something … and was ejected. Pujols also was ejected.

Anyway, Kendrick singled after that, but was stranded when Freese grounded out to third.

Mid 5th, Angels 1-0: De La Rosa deserves some runs up on the board in his favor, with the way he’s pitching.

De La Rosa sandwiched a pair of strikeouts  to Cowgill and Trout around a groundout by Calhoun. The righty is through five innings of work with just 80 pitches thrown, and he’s pitched more than well enough to win this game.

End 4th, Angels 1-0: Whatever happened to Cespedes, it was not an injury. The team said it was a “personal matter” and did not elaborate.

With Ortiz taking the night off and Cespedes leaving the game, the middle of the Red Sox order is mighty thin. With the 2-3-4 hitters up, the Red Sox went down 1-2-3 against Shoemaker.

Pedroia flied out to left, Nava grounded out to shortstop and Middlebrooks popped out to second.

Mid 4th, Angels 1-0: De La Rosa got a little help from his friends and breezed through that half-inning.

After whiffing Freese, De La Rosa gave up a long fly ball to left-center to Aybar that had extra bases written all over it. But Betts, who is good for at least one pretty nifty catch per game nowadays, made the grab at the wall for the out.

After that, De La Rosa got Iannetta to ground out to shortstop.

Mookie Betts, Christian Vazquez and Brock Holt failed to get anything going against Matt Shoemaker.

Betts struck out, Vazquez grounded out and Holt lined out to left field.

The big news here, however, is that Yoenis Cespedes has exited the game. It’s unclear at this point why Cespedes left the game, but the outfielder left a game during Boston’s recent road trip with a hand contusion.

Mid 3rd, Angels 1-0: The Red Sox successfully challenged a pickoff at first base in the third inning.

Howie Kendrick singled into center field after a pair of popouts. He wandered a little too far off the bag, though.

Catcher Christian Vazquez fired a snap throw down to first following Rubby De La Rosa’s second pitch to David Freese. Kendrick dived back in and initially was called safe. The Red Sox challenged the ruling, and the umpires overturned the call after a 34-second review.

Allen Craig grounded out to third base in his first at-bat off the disabled list. Craig went 1-for-3 with a two-run single Wednesday in his second of two rehab games with Triple-A Pawtucket.

Erick Aybar singled and took second when De La Rosa unleashed a wild pitch. The right-hander then issued back-to-back walks to Chris Iannetta and Collin Cowgill, packing the bags for the top of the Angels’ order.

De La Rosa escaped the jam, though. He struck out Kole Calhoun and Mike Trout to end the inning.

Calhoun fanned on the second of back-to-back sliders. Trout, who went down on three pitches, couldn’t catch up to a 95 mph fastball.

End 1st, Angels 1-0: Hitting with runners in scoring position continues to be an issue.

The Red Sox, who have left 41 men on base this series, stranded Brock Holt at second base in the first inning.

Holt was plunked to begin the Red Sox’s night offensively. He swiped second base — his seventh steal of the season — with one out.

Dustin Pedroia had struck out for the first out. Neither Daniel Nava nor Yoenis Cespedes could knock in Holt, as they also struck out.

Two of Matt Shoemaker’s first-inning strikeouts came on changeups. The other was the result of a devastating slider that dipped out of the zone.

Yoenis Cespedes, who terrorized the Halos with his arm while with the Oakland Athletics, cut down a runner at the plate to end the first inning.

The Angels still jumped on the scoreboard in the opening frame, though. Josh Hamilton plated Kole Calhoun, who led off with a single, with a double to the left field wall.

Hamilton tried to score on Howie Kendrick’s two-out single into left field, but Cespedes showed why that was a horrible decision. Cespedes fired a perfect strike to catcher Christian Vazquez to nab Hamilton by a mile.

5:25 p.m.: Allen Craig has returned a day earlier than expected.

Craig, who has been on the disabled list with a foot injury, will bat fifth and serve as the designated hitter. Craig played two rehab games at Triple-A Pawtucket this week and was expected to be activated from the DL on Friday, but Will Middlebrooks and Mike Napoli are banged up. Thus, the Red Sox decided to activate Craig a day early rather than have him play a third minor league rehab game.

Outfielder/first baseman Alex Hassan, who was recalled Wednesday, was optioned back to Pawtucket to make room for Craig.

David Ortiz is out of the starting lineup. Ortiz was lifted for a pinch-hitter in the ninth inning of Wednesday’s loss because of general soreness, though Red Sox manager John Farrell indicated that Thursday’s off day was planned.

Brock Holt and Kelly Johnson will play third base and first base, respectively, for the second straight night.

Thursday’s complete lineups are below.

5 p.m. ET: Remember that good baseball the Boston Red Sox began playing toward the tail end of their recent road trip? Yeah, about that.

The Red Sox have followed their 5-1 stretch with a four-game losing streak. Three of the losses have been to the Los Angeles Angels, who will look to complete a four-game sweep Thursday at Fenway Park.

The Red Sox, who enter Thursday 14 games under .500 (56-70), are trying to avoid suffering their first four-game sweep since April 2010. The only other time the Red Sox have been swept by the Angles in a series of more than three games was back in 1962.

Clearly, these are tough times for Boston. The club is a season-high 17 1/2 games back in the American League East and returning home after a three-city road trip hasn’t yielded favorable results. The Sox must press on, though, as a lot needs to be sorted out over the final 36 games.

Rubby De La Rosa will look to put the Red Sox back on track in Thursday’s series finale against the Halos. The right-hander also is looking to overcome a shaky outing his last time out Saturday against the Houston Astros. De La Rosa allowed six earned runs on nine hits over just four innings against the ‘Stros. It marked the first time in six career starts at Fenway that he allowed more than three runs.

Thursday’s first pitch is scheduled for 7:10 p.m. ET. Tune in on NESN and stick around with NESN.com’s live blog. 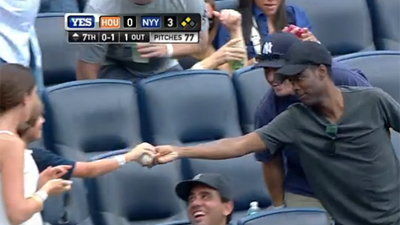