FOXBORO, Mass. — Big bro can?t get over the hump.

Arthur Jones? Indianapolis Colts fell to Chandler Jones? New England Patriots in Sunday night?s AFC Championship Game at Gillette Stadium. Chandler has held the upper hand in the sibling rivalry since entering the NFL in 2012, and Arthur didn?t hide from that reality following another crushing loss to his younger brother.

?The kid?s a champion. He?s a warrior. He battled through injury (this season),? Arthur Jones said of Chandler while fighting back tears after the game. ?I don?t want to be a sore loser. My mom and dad raised me better than that. Hats off to them, and we?ll be ready to go next time.?

Arthur, who dealt with an ankle injury this season, didn?t play in the teams? Week 11 showdown, which New England won handily 42-20. The defensive end certainly had the potential to impact Sunday?s contest, but the Patriots still blew past the Colts 45-7.

Arthur — the oldest of three brothers (UFC champion Jon ?Bones? Jones is the other) — was visibly upset following Sunday?s blowout. The 28-year-old felt like he could have done more on the field and instead let a golden opportunity slip away.

?I apologize to C-Red (Cory Redding). He?s a great leader on this team. Our good wasn?t good enough to get it done for him. I don?t know how much time I?ve got left or any guys — Reggie (Wayne), D?Qwell (Jackson), all of the great leaders on this team — I don?t know how much time they?ve got left, and it hurts me more that I didn?t get it done for them.?

Arthur at least will be able to watch his little brother play for football?s ultimate prize in two weeks when the Patriots face the Seattle Seahawks in Super Bowl XLIX. But for now, the wounds still are fresh.

?Nah, no satisfaction,? Arthur said with a hint of a smile when asked whether losing to Chandler made the defeat sting less. ?As a competitor, you always want to go to the Super Bowl. I always want to beat my brother in everything I do. Hats off to them. It?s a team sport. They won fair and square, and we?ll be back.?

Chandler and Arthur are very important to their respective teams. But Chandler?s Patriots simply are on another level at this point. 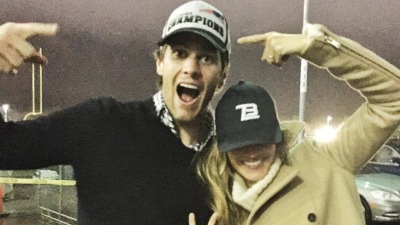