After one of the craziest endings in Super Bowl history, the New England Patriots are your Super Bowl XLIX champions.

Jermaine Kearse made a ridiculous circus catch on a deflected ball to put his team down on the 3-yard line. But on second-and-goal, Malcolm Butler jumped a slant route and intercepted Russell Wilson’s pass in the end zone.

Russell Wilson hit Marshawn Lynch on a 31-yard pass completion up the left sideline before the two-minute warning. Seahawks ball at midfield.

The Patriots quarterback marched his team down the field yet again on a 10-play, 64-yard drive and hit Edelman on a perfectly executed scat route for the 3-yard score to put his team in front.

Brady is putting on a legendary performance. His 37 pass completions on the night are a new Super Bowl record, and the Patriots contingent started a “Brady, Brady!” chant after his fourth touchdown pass.

Fourth quarter, 6:52, Seahawks 24-21: New England’s defense comes up with another huge stop, and the Patriots have the ball on their own 36-yard line with a chance to take the lead.

Tom Brady threw a huge completion to Julian Edelman on a third-and-14 in his own territory, then capped off the huge drive with a 4-yard strike to Danny Amendola for the touchdown.

We have ourselves a ballgame.

Fourth quarter, 12:10, Seahawks 24-14: LeGarrette Blount was stopped short of the first, but the Patriots’ defense held strong on Seattle’s ensuing drive to force a three-and-out. If there ever was a time for Tom Brady to step up big, it’s now.

End of the third quarter, Seahawks 24-14: The Patriots have 15 minutes to erase a 10-point deficit and save their season. They’ll have the ball at their own 23-yard line for a third-and-1 when play resumes.

Third quarter, 0:55, Seahawks 24-14: The Patriots’ defense did its job. Now it’s on the offense to get going again. They’ll start from their own 14-yard line. Seahawks fans are thunderous.

The Patriots’ offense hasn’t clicked in the second half, and time clearly is running out quickly. The Patriots’ defense will need to force a quick stop here if they have any chance of mounting a comeback.

Third quarter, 4:54, Seahawks 24-14: Welp, the Patriots have to come back by 10. They’ve rallied from bigger deficits this season, but they haven’t played a team like the Seahawks.

Wilson found a wide-open Doug Baldwin in the end zone for the score. It appeared Revis got picked by an official.

Third quarter, 8:09, Seahawks 17-14: The Patriots are going to need to mount a comeback. How big of a comeback will be decided by this drive.

Tom Brady just threw another costly interception, this one forced to Gronk and snagged by linebacker Bobby Wagner. The Patriots need to re-gain control quickly if they want to win this game.

Third quarter, 11:09, Seahawks 17-14: The Seahawks got another 45-yard chunk with Chris Matthews on Kyle Arrington. They had to settle for a field goal after the Patriots held Lynch to 9 yards on three carries.

That’s a small victory for both teams.

The Patriots now have to come out and match with a field goal or get a TD here.

Third quarter, 15:00: The game is starting back up after a highly entertaining Katy Perry halftime show.

The Seahawks will receive.

End of the half, 14-14: The Patriots kneeled on the kickoff return, and we have a tie game going into the half.

It’s time for Katy Perry to do her thing, then the Seahawks will receive the second-half kickoff.

Chris Matthews went into the game without a career reception. He now has two catches for 55 yards and a touchdown. Yikes.

Shane Vereen, Julian Edelman and Danny Amendola are doing damage on the Patriots’ side. Brady has 177 yards, two touchdowns and an interception on 20-of-27 passing.

Second quarter, :02, 14-14: The Patriots just allowed the Seahawks to drive down the field in 29 seconds and score a touchdown. And the Seahawks get the ball in the second half.

Logan Ryan allowed a touchdown to Chris Matthews. Kyle Arrington allowed a big play and was called for a facemask.

Second quarter, :31, Patriots 14-7: Bon Jovi’s “This Is Our House” is playing, which can mean only one of two things: Bill Belichick has control of the iPod, or the Patriots just scored. It’s the latter.

The Patriots dissected the Seahawks, cruising down the field, and Tom Brady hit tight end Rob Gronkowski in the end zone on a fade. Gronk caught it off his helmet and spiked the crap out of the ball.

Second quarter, 2:16, 7-7: We’re all tied up. After not completing a pass through a quarter and a half, Russell Wilson hit on two consecutive throws, the second a 45-yarder to wideout Chris Matthews. That was the first catch of his career.

Marshawn Lynch got the touchdown, and Patriots linebacker Dont’a Hightower was shaken up on the play. He refused medical attention on the sideline.

Second quarter, 7:07, Patriots 7-0: The Patriots had a chance to take a big lead, but went three-and-out after two incompletions by Tom Brady, and a 7-yard completion to Julian Edelman.

I’ll spare you with the image, but Jeremy Lane definitely broke his arm.

Second quarter, 9:47, Patriots 7-0: In a way, the Jeremy Lane interception might have been a good thing for the Patriots.

He hurt his arm on the play, which forced Tharold Simon into the game and Byron Maxwell into the slot. Tom Brady is going after Simon, and Brandon LaFell just scored from 12 yards out while being covered by the second-year pro.

The Patriots aren’t having much trouble moving the ball at this point in the game.

Julian Edelman leads the team with 34 yards on three catches. Shane Vereen has four catches for 16 yards. Brady is 14-of-18 passing for 111 yards and one touchdown with an interception.

Second quarter, 13:57: The Patriots forced another punt. They allowed only one first down after two runs by Russell Wilson and Marshawn Lynch.

The Patriots haven’t allowed a reception so far, and their coverage has been unbelievable. Russell Wilson is incredible in the pocket, though. He basically cannot be sacked.

End of the first quarter: We have no score through 15 minutes. The Seahawks have yet to attempt a pass.

The Patriots ate up nearly eight minutes on one drive. It ended with an interception, when it really needed to end with at least a field goal.

Jeremy Lane, who picked off Brady, is doubtful to return with an arm injury. He was hurt when wideout Julian Edelman tackled him.

First quarter, 1:39: In a game when scoring might be a rare occurrence, Tom Brady just threw an inexcusable interception when the Patriots could have kicked a field goal.

Brady thew it right into Jeremy Lane’s arms inside the red zone. The Seahawks now have the ball on their own 14-yard line.

Lane did appear to hurt himself on the play.

First quarter, 9:20: The Seahawks opened with a three-and-out on their first drive. Marshawn Lynch carried the ball three times for 8 yards. Jamie Collins came up with a big stop on third-and-2 to keep Lynch for no gain.

First quarter, 11:35: The Patriots got one first down, then were forced to punt on their second set of downs. The Patriots drew a running into the kicker penalty, but they elected to keep their initial punt. Kyle Arrington stopped punt returner Bryan Walters at the 16-yard line.

Referee Bill Vinovich should have called the Seahawks for roughing the kicker, which would have been a 15-yard penalty and a first down. Ryan Allen was hit on his plant leg.

First quarter, 14:57: Danny Amendola returned the kick to the 18-yard line. It is so loud in here.

The Patriots called heads, it landed tails, and the Seahawks chose to defer. The Patriots will receive.

6:13 p.m.: Both teams are on the field after being introduced. We’re 17 minutes from kickoff.

The Patriots came out to Ozzy Osbourne’s “Crazy Train,” as usual. The Seahawks entered to The Verve’s “Bittersweet Symphony.”

5:53 p.m.: We’re just 37 minutes away from kickoff, and both teams have gone through their pregame warmups. The stadium is filling up, and it’s mostly Seahawks fans in here. Both fan bases were loud throughout pregame warmups, but Seattle fans were much louder.

4:33 p.m.: The Patriots released their inactives early, and there’s one very surprising name included in the list.

Running back Jonas Gray is inactive. That means it will be LeGarrette Blount, Brandon Bolden and Shane Vereen in the backfield tonight.

4:27 p.m.: Seahawks safety Kam Chancellor is wearing a brace on his left knee, and he went through pregame warmups with the training staff. Chancellor injured his knee Friday during practice. Sports Illustrated’s Peter King said Chancellor fell on his knee.

Chancellor looked fine in the warmups, but it’s concerning that he has to wear a brace at all.

3:15 p.m. ET: We’re all set up from University of Phoenix Stadium in Glendale, Ariz., after a great week.

Super Bowl XLIX should be one for the ages, since the New England Patriots and Seattle Seahawks are incredibly even, and their strengths match up well with each other. Tom Brady and the Patriots have a top-tier passing attack, and the Seahawks have one of the best pass defenses in the NFL. The Patriots aren’t great on the ground, but the Seahawks have struggled to stop the run during the playoffs.

The Patriots have a dangerous pass defense and shaky run defense, while the Seahawks’ biggest strength is Marshawn Lynch and their rushing attack. The Patriots’ ability to stop Lynch and quarterback Russell Wilson will be key in beating the Seahawks.

Hopefully this game will be remembered because of what transpired on the field, not by a lack of air in footballs. The latest report from NFL Media on DeflateGate shows that only one ball was two PSI under the legal limit, and the rest were only under by a fraction. ProFootballTalk reported earlier in the week that the ball that Indianapolis Colts linebacker D’Qwell Jackson intercepted was the only one 2 PSI under the allowed inflation.

That looks a lot less damning for the Patriots. 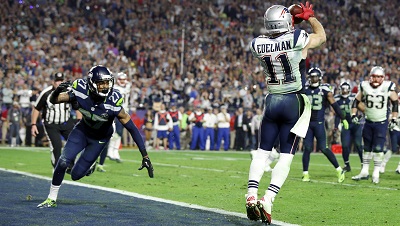 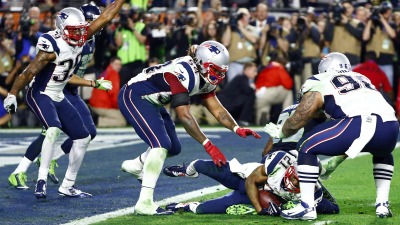