Spikes was selected by the Patriots in the second round of the 2010 NFL Draft and spent four seasons in New England before playing for the Buffalo Bills in 2014.

Spikes won’t count against the Patriots’ 2016 compensatory picks formula, since he signed after May 13. The Patriots reportedly released cornerback Chimdi Chekwa to make room for the veteran linebacker.

The Patriots lack depth at linebacker as starters Dont’a Hightower (shoulder) and Jerod Mayo (knee) are returning from injuries.

Spikes is a solid run defender who should help contribute on first- and second-down to begin the season if Hightower or Mayo aren’t ready. The Patriots also lacked veteran experience at the position in case of an in-season injury.

Spikes recorded 174 tackles in his four years with the Patriots to go along with one sack, four forced fumbles, a fumble recovery, two interceptions and 14 passes defended.

Spikes made some controversial comments after leaving the Patriots last year under suspect conditions. Spikes was placed on injured reserve before the 2013 playoffs when he was late to a team meeting during a snow storm.

Spikes said the Patriots misreported his knee injury, which is against NFL rules. He also called his time in New England “four years a slave.”

Spikes also made headlines when he tweeted he was “confused” by the justice system after former Patriots and University of Florida teammate Aaron Hernandez was found guilty of first-degree murder.

Update (5:50 p.m. ET, Thursday): Spikes could make up to $2 million this season, according to Tom Pelissero of USA TODAY Sports. Here’s the breakdown: 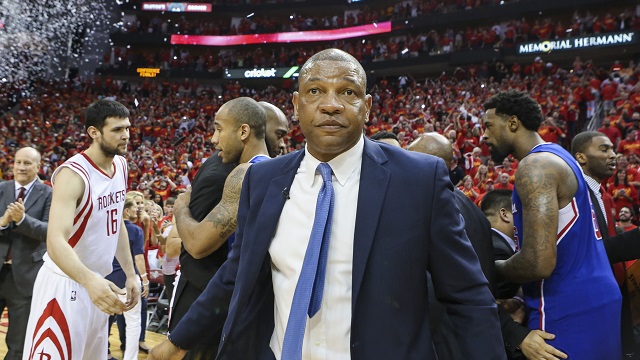 Doc Rivers’ Speech To Clippers: Getting Heart Broken Is Worth It (Video)