The Boston Bruins once again followed up a strong second period with a subpar third Wednesday night, allowing the game-tying and game-winning goals 82 seconds apart in a loss to the Philadelphia Flyers.

The 3-2 defeat dropped the Bruins to 1-2-1 on their current five-game road trip, which they’ll close out Friday in Buffalo. The Sabres own the third-worst record in the NHL, but they had Boston’s number when the teams met last month at TD Garden, riding a five third-period goals and a hat trick by local kid Jack Eichel to a 6-3 win.

Buffalo lost five in a row following that game but has since rebounded, earning consecutive road wins over the Winnipeg Jets and Minnesota Wild in its last two contests.

As the Bruins turn their attention toward their Atlantic Division foes, let’s run through some news and notes from Wednesday night’s action.

— Jimmy Hayes, a usual third-liner, was elevated to Boston’s top line for the matchup with the Flyers. Hayes entered Wednesday with five goals in his previous six games but did not generate much offense in the loss, managing just one shot on goal in 15:34 of ice time.

— Zac Rinaldo, who began his career with the Flyers, told reporters Tuesday he hoped for a “positive” reception in his first game back at the Wells Fargo Center. That did not happen. The Flyers crowd instead loudly booed the Bruins winger throughout the first period.

— The Bruins’ fourth line put forth arguably its best effort of the season Monday, with Rinaldo, Max Talbot and Landon Ferraro combining for nine of the team’s 33 shots on goal in a loss to the Rangers.

Julien had high praise for the unit after Tuesday’s practice, comparing it to the beloved “Merlot Line” of Shawn Thornton, Gregory Campbell and Daniel Paille.

?To me, that fourth line reminded me a lot of our fourth line of the past there, when Piesy and Soupy and Thorny were doing the same thing here,? Julien told reporters, via The Boston Globe. ?They had a lot of scoring chances. They created things. When you have that — I say that all the time — you?re able to utilize your bench a little bit better.

?There are some guys that have played some big minutes since the beginning of the year because we didn?t have that. Here?s an opportunity here to balance things out a little more with performances like they gave us (Monday).?

— Miller’s goal was the Bruins’ defenseman’s first since Dec. 7, snapping a streak of 15 games without one. It also was his third goal of the season, giving him a new career high.

— Speaking of goals, Loui Eriksson’s power-play tally later in the second pulled him into a tie with Patrice Bergeron and Brad Marchand for the team lead. Each has 15 goals on the season.

Marchand has yet to record a point in three games since returning form his suspension.

— The Bruins were a perfect 3-for-3 on the penalty kill against the Flyers. They’ve allowed just two power-play goals over the last 16 games, going 38-for-40 on the PK during that span.

— The tweet of the night came courtesy of Torey Krug’s younger brother, Zak, who posted the following after the Bruins D-man was leveled along the boards by Philadelphia’s Brayden Schenn. 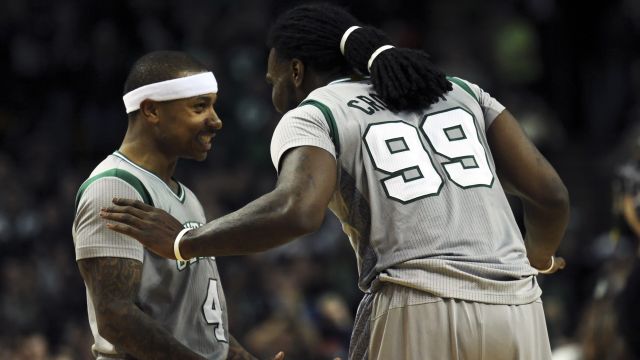