Thus ends the first round of the 2016 NFL Draft. It wasn’t quite as fun without a Patriots pick.

11:16 p.m.: The 49ers drafted Stanford guard Joshua Garnett 28th overall. The Patriots would have been on the clock now.

11:14 p.m.: The Kansas City Chiefs traded the 28th pick to the 49ers, who are back on the board. They selected Oregon defensive lineman DeForest Buckner seventh overall.

11:11 p.m.: The Green Bay Packers drafted UCLA defensive tackle Kenny Clark. Clark is just the third interior defensive lineman to be selected in the first round so far. Alabama’s Jarran Reed and A’Shawn Robinson are still on the board. Ole Miss’ Robert Nkemdiche also is available.

11:01 p.m.: The Broncos drafted Memphis quarterback Paxton Lynch with the 26th overall pick. That’s their starting quarterback of the future. The Broncos only had Mark Sanchez and Trevor Siemian on their QB depth chart.

10:57 p.m.: Are the Denver Broncos about to draft a quarterback? They just traded up from the 31st pick to the 26th pick with the Seattle Seahawks. The Broncos gave up the 94th overall pick to move up five spots.

10:36 p.m.: The Texans must have been scared another team would leap frog them for Fuller. The Redskins selected TCU wideout Josh Doctson with the 22nd overall pick. It will be fascinating to see who has the better career between Fuller and Doctson. This trade could look bad for Washington.

10:30 p.m.: The Texans selected Notre Dame wide receiver Will Fuller with the 21st overall pick. Fuller is a speed demon with small hands and drop issues. He could do some damage across from DeAndre Hopkins, however.

10:28 p.m.: The Houston Texans traded up from the 22nd overall pick to the 21st overall pick with the Washington Redskins. The Texans gave up a 2017 sixth-round pick to move up.

10:25 p.m.: The New York Jets drafted Ohio State linebacker Darron Lee 20th overall. Lee is a freak athlete who could do some serious damage behind the Jets’ talented defensive line.

10:07 p.m.: The Falcons drafted Florida safety Keanu Neal 17th overall. He might play a hybrid safety/linebacker role with the Falcons.

UCLA linebacker Myles Jack is sliding far because of a knee injury.

9:50 p.m.: The Oakland Raiders made a surprising move by selecting West Virginia safety Karl Joseph 14th overall. He was rated as the 46th overall prospect by CBSSports.com. A knee injury prevented Joseph from working out at the NFL Scouting Combine.

9:41 p.m.: The Miami Dolphins selected Laremy Tunsil 13th overall. Tunsil was hacked on Twitter, and a video of him smoking out of a gas mask was posted from his account before the draft. He was considered the top prospect on some draft boards.

9:28 p.m.: The Tampa Bay Buccaneers selected Florida cornerback Vernon Hargreaves III. He was rated higher on most draft boards than Apple. The Buccaneers picked up a fourth-round pick and still selected a quality player.

9:22 p.m.: The New York Giants, who are offensive tackle-needy, selected Ohio State cornerback Eli Apple, who was blasted by an anonymous scout earlier this week because he can’t cook.

9:08 p.m.: The Bears traded up with the Tampa Bay Buccaneers from 11th overall to ninth overall. The Bears only had to give up a fourth round pick to trade up two spots.

So, the Titans now have the eighth overall pick, and the Browns will be picking 15th — for now.

Both players have ideal size and athleticism at five-technique defensive tackle.

8:45 p.m.: The Jacksonville Jaguars selected Ramsey fifth overall. He has the size and athleticism to play either cornerback or safety in the NFL. He could be the new Richard Sherman in Gus Bradley’s defense.

8:39 p.m.: The Dallas Cowboys grabbed Ohio State running back Ezekiel Elliott fourth overall. That’s very high to take a running back, but he was dominant in college, averaging 6.7 yards per carry and 7.7 yards per reception.

Personally, I would have taken Florida State defensive back Jalen Ramsey.

I wonder if Laremy Tunsil?s stepfather, who he has been fighting with in the courts, got his revenge tonight.

8:30 p.m.: The San Diego Chargers selected Ohio State defensive end Joey Bosa. Going into the draft process, he was considered the top player in the draft. He’ll have to play outside linebacker in the Chargers’ 3-4 base defense.

8:28 p.m.: The Twitter account of Ole Miss offensive tackle Laremy Tunsil, who’s the top prospect on some draft boards, appears to have been hacked before the draft.

Wentz started just 22 games at North Dakota State with just seven coming in 2015. Seems like a risk, but every team is desperate for a quarterback.

8:15 p.m.: Roger Goodell was booed, and the Rams selected Cal QB Jared Goff with the No. 1 overall pick. No surprise with either.

Goff could wind up being great, but I’ll have a hard time forgetting his five-interception game against Utah in 2015.

8:05 p.m.: OK, apparently NOW the Rams officially are on the clock. Roger Goodell just said so.

6 p.m. ET: The NFL reportedly told the Los Angeles Rams, who hold the first overall pick in the 2016 draft, to keep their intentions secret leading up to event’s kickoff Thursday at 8 p.m. ET.

They seem to have done as they were told, but it still appears to be a good bet Cal quarterback Jared Goff will be the first player selected, followed by the Philadelphia Eagles selecting North Dakota State’s Carson Wentz.

The Rams and Eagles each gave up a bounty to move up from 15th and eighth overall, respectively, to grab those quarterbacks. What the San Diego Chargers will do at third overall remains a mystery, though they’ve been tied to Notre Dame offensive tackle Ronnie Stanley, Oregon defensive lineman DeForest Buckner and cornerback Jalen Ramsey.

Here’s the full order of first-round picks. The Patriots, of course, had the 29th overall pick taken away as part of the Deflategate punishment. 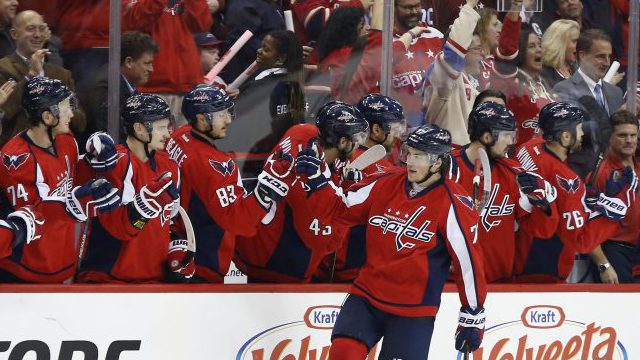 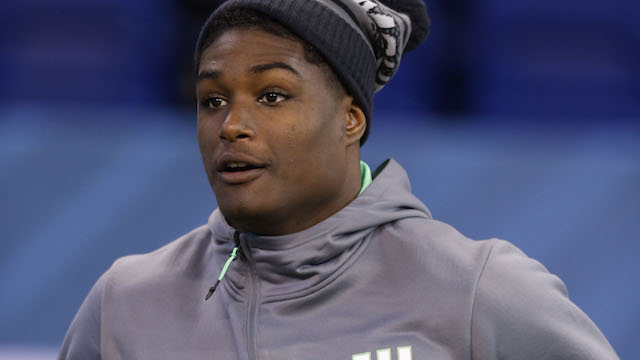