Bruins' Defense Stepping Up As NHL Playoff Race Draws To A Close - NESN.com Skip to content

BOSTON — The Bruins don’t control their own destiny in the race for the final two playoff spots in the Eastern Conference. That said, the B’s will give themselves a great chance to qualify if they bring the same defensive performance to Saturday’s regular-season finale that we saw in the last two games.

The Bruins gave the Red Wings very little in Thursday night’s 5-2 win at TD Garden. Boston gave up just 15 shots on goal, tying a season low previously set March 29 at New Jersey. Perhaps most impressive was Detroit’s five shot attempts at even strength in the third period, which shows how well Boston clamped down defensively while protecting a lead.

“We were really playing with thick layers,” Bruins defenseman Zdeno Chara said. “Everybody was really skating and simplifying the game and really was not trying to do too much, and that?s how we pretty much were playing really effectively in that stretch of time. So, I don?t think we allowed them too much, at least of scoring chances.”

The B’s did a tremendous job keeping the Red Wings out of the scoring areas, specifically the slot, as seen in the chart below. “Especially today, I think we closed on them pretty quickly. Didn’t give them much time to enter,” Rask said. “We blocked a lot of shots, probably as many as they had on net, and when you do those things it takes a lot of opportunities away from the other team.”

Boston’s shutdown line of Brad Marchand-Patrice Bergeron-Lee Stempniak was matched up against the Red Wings’ first line of Justin Abdelkader-Dylan Larkin-Henrik Zetterberg and completely neutralized them.

Bergeron’s line dominated puck possession with a Corsi percentage over 62 against this Red Wings trio, in addition to holding Larkin to two shots and Zetterberg and Abdelkader to zero shots apiece.

The Bruins have allowed just three goals in their last two games, and Saturday’s finale against the Senators won’t be easy despite Ottawa’s fifth-place standing.

The Sens have scored three or more goals in three of their last four games and rank ninth in goals scored per contest this season. Ottawa captain and defenseman Erik Karlsson tallied his 81st point Thursday night and is on pace to become the first blueliner to lead the league in assists since Bobby Orr.

Thursday’s win was proof of how well the Bruins are capable of playing when they stick to head coach Claude Julien’s defensive structure and use that to create chances at the offensive end of the ice. They need to do it one more time to increase their chances of playoff qualification.

“I believe in this team,” Bergeron said. “I know how good we are, and what we can be when we?re at our best, and everyone?s chipping in. That?s when we have the most success, obviously. So, (Thursday night) was a perfect example, and we?ve got to carry that forward.” 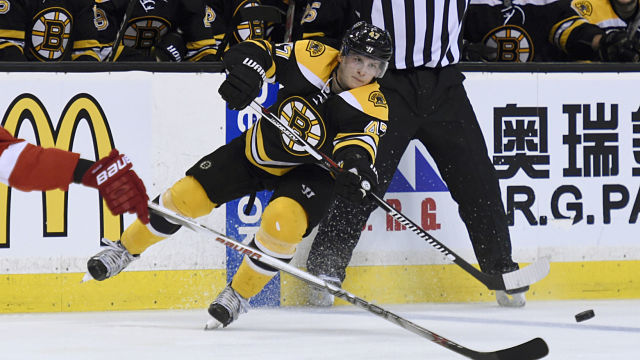