FOXBORO, Mass. — Tom Brady’s four-game suspension is over, which means a return to form for New England’s passing attack and an increase in tongue-lashings for Patriots receivers.

Julian Edelman will know when the bromance between he and Tom Brady is dead: Brady will stop screaming at Edelman when the quarterback’s favorite receiver makes an error on the practice field.

All Patriots receivers have felt Brady’s wrath one time or another. He will accept nothing but the best from his wideouts, which is one of the reasons so many have failed to fully acclimate to New England’s grueling offense.

Patriots receivers must read the defense, and be on the same page as their quarterback, before they know their job on that specific play. There are times for controlled free styling, but for the most part, the Patriots’ offense must work like a complex well-oiled machine. And practice is where to make and fix the mistakes.

There isn’t a last time Brady has yelled at Edelman. It’s “anytime” — though his first practice with the Patriots back in 2009 was “the craziest.”

“That doesn’t change,” Edelman told NESN.com on Thursday. “If I don’t do something right, he’s going to get mad at me. That’s why he is who he is. I would feel awkward if I did something wrong and he didn’t yell at me.”

Edelman enjoys playing up his bromance with Brady. It’s often mocked on 98.5 The Sports Hub’s “Toucher and Rich” morning show, but Edelman isn’t only in on the joke — he started it.

The radio shows will have fun with this quote.

“There’s been so many times,” Edelman said. “He comes up to me and says, ‘If I yell at you, it means I love you, babe.’ So I guess he must really love me.”

It has happened to tight end Rob Gronkowski and wide receiver Danny Amendola, too.

“Oh yeah, it’s happened to everyone,” Amendola said. “Just a competitor, wants to win. Gotta get on the same page.”

It’s clear Brady hasn’t changed in his four weeks off from the team. He elected not to meet with the media this week, but he downplayed his return Monday night while speaking to Westwood One’s Jim Gray. The team has in turn understated the return of its best player, though Edelman gave a brief update when asked about Brady as a leader.

“You could tell he’s been working hard,” Edelman said. “Comes back, and he’s just always there. He’s one of those types of guys who has passion about the game, loves the game. You feed off of that.”

It shouldn’t take long for Brady to get back on the same page with his receivers. Edelman, Amendola and Brady trained in Montana last offseason. This summer, they chose somewhere less remote and bear-ridden by working out together between OTAs and training camp in Los Angeles.

“It was good,” Edelman said. “It was good, but our ultimate focus is on the Cleveland Browns and not what happened in the offseason.”

Edelman would say there was “no bear spray this year, but there was definitely fire repellent” in the dry California weather.

You’ll likely see the dividends from those West Coast workout sessions Sunday when the Patriots play the Browns. When Brady takes the field, comes out firing and doesn’t appear to skip a beat, you can look to those offseason sessions and the in-practice rage. 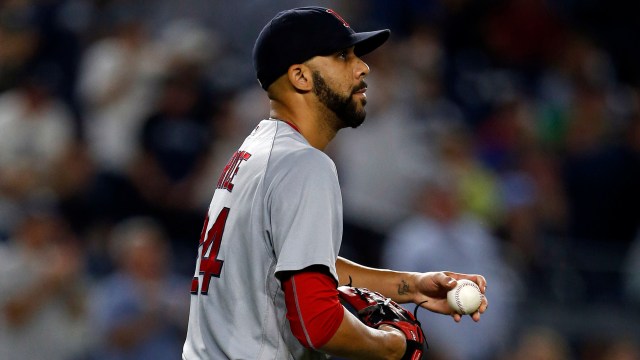