The signs of spring in New England are few and far between, especially after a no-joke April 1 snowstorm that impacted much of the region over the weekend.

But the surest indication this long winter nightmare will soon end comes Monday afternoon on Yawkey Way in Boston, where the Red Sox will open the 2017 season against the Pittsburgh Pirates at Fenway Park.

Here are a few of the storylines to watch as you settle in for Monday’s season opener.

Porcello’s encore?
The Red Sox parted with a lot of good young talent in the offseason, most notably Yoan Moncada, who they sent to Chicago in order to acquire star pitcher Chris Sale from the White Sox. Yet it will be Porcello — not Sale nor the injured David Price — who gets the ball on Opening Day. The reigning 2016 Cy Young Award winner hopes to prove last season wasn’t a fluke after establishing career bests in wins, ERA, innings and strikeouts. The last time we saw him, however, Porcello got shelled by the Cleveland Indians in the American League Division Series. That might serve as a little extra motivation this season.

Moving on
For the first time in more than a decade, the Red Sox start the season without David Ortiz on the roster. The Red Sox designated hitter finally called it a career after a wildly successful 2016 season, leaving a sizable hole in the Boston lineup. The Red Sox didn’t add a big-name bat like Edwin Encarnacion or Mike Napoli in the offseason to replace him, instead opting for an under-the-radar signing of Mitch Moreland from Texas who could fit in quite nicely at Fenway. Boston also hopes the continued progression of players like Mookie Betts, Jackie Bradley, Xander Bogaerts and Andrew Benintendi help offset the loss of Ortiz.

Hungry for a comeback
Perhaps the most interesting thing to watch Monday will be the reception Pablo Sandoval gets when introduced to the home crowd. His Red Sox tenure, thus far, has been a disaster. The Red Sox have paid Sandoval more than $35 million to play 129 games over the last two seasons, getting next to no return on their investment. According to Fangraphs, Sandoval’s been worse than replacement level, providing minus-2.2 wins above replacement since the start of 2015. However, there’s reason for optimism. Sandoval was arguably the Red Sox’s best player in the spring, hitting .338 with five home runs and 20 RBIs in 65 spring at-bats.

Fever (first) pitch
It doesn’t have a whole lot to do with what actually happens on the field, but who throws out the ceremonial first pitch is always a hot topic. If there were betting odds, we’d say Patriots quarterback Tom Brady or the aforementioned Ortiz would top the list. The Red Sox usually keep that under wraps until right before it’s go time, so we’ll have to wait until then to find out.

Fun with numbers
Finally, here are some noteworthy Opening Day stats ahead of the opener.

–Monday is the 41st time the Red Sox have opened the season at home and only have done so four times in the last 22 seasons. The last time they did so was 2010.

–Dustin Pedroia is making his 11th straight Opening Day start at second base. The only Red Sox player with a longer streak at one position is Carl Yastrzemski, who started 12 straight seasons in left field.

–Benintendi is starting in left field for the Red Sox and is the youngest Opening Day starter in left since Carl Yastrzemski. 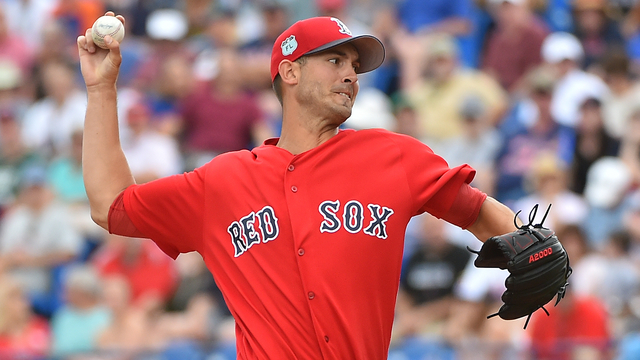