Stephen A. Smith reported Monday that the Boston Celtics would like to trade for Chicago Bulls star Jimmy Butler after swapping first-round picks with the Philadelphia 76ers, and as far as he’s concerned, that’s the right move for C’s president of basketball operations Danny Ainge.

Smith appeared Tuesday on WEEI’s “Kirk & Callahan” (with Mike Mutnansky and John Tomase filling in), and the outspoken ESPN “First Take” personality explained why he believes the Celtics should go for it now by pursuing Butler in addition to Utah Jazz forward Gordon Hayward, who is set to hit free agency this offseason.

?I believe so, only because you?ve got multiple picks in the future,” Smith said, per WEEI.com. “I mean, you look at 2018, 2019 and the picks you have available to you, it?s not like you are salvaging your future and going for it all now. Boston is in the rarefied position of being able to go for it now and still have your future intact because you have enough young guns, and you have experienced dudes as well.

“Then on top of it all, you have draft picks coming down the pipeline where you can continue to buffer this roster. That is why I believe if you didn?t have any future picks in 2018 and 2019, then I would be a bit reluctant because I still don?t know if that definitely will be enough to knock off LeBron (James) and the (Cleveland Cavaliers).”

The Cavs just defeated the Celtics in the Eastern Conference finals before losing to the Golden State Warriors in the NBA Finals. They’re still considered the class of the East despite parting ways with their general manager Monday, but Smith senses some vulnerability in Cleveland, especially with James’ future beyond next season unclear.

“Because you have a future to look forward to (in Boston), better than most teams in the NBA because Danny Ainge without question has done an exceptional job, I think you go for it now because Cleveland is vulnerable,” Smith said, per WEEI.com. “I think this is the most vulnerable LeBron has been in the Eastern Conference since he departed Cleveland the first time for Miami. Why not go for it if you?re Boston?”

We can’t say for sure what the Bulls are looking for in exchange for Butler. We also don’t know whether Hayward will consider leaving Utah for Boston in free agency, or whether James will leave Cleveland after next season, blowing open the window for the Celtics to reign supreme in the East. Ainge and the C’s have plenty of options ahead of Thursday’s NBA draft, though, and the rumors and hot takes are emerging in bulk. 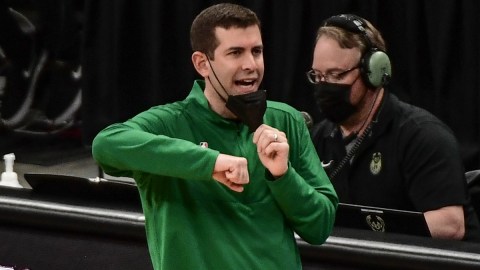