The 2017 Boston Red Sox and extra innings are like two peas in a pod.

For the second straight night, nine innings weren’t enough for the Red Sox and Baltimore Orioles to decide a winner at Camden Yards. But that didn’t faze the Sox. Instead, they went on to win 1-0 when Jackie Bradley Jr. scored on a wild pitch in the top of the 11th inning. It was their second consecutive 11-inning win, too, as they also downed Baltimore 10-8 the previous evening.

Winning in extra innings has become some sort of a trend for Boston this season. It now has won 15 games in extra frames, which is tied for the most it has in a single season. The only other time the Red Sox accomplished that feat was in 1943.

The Red Sox have tied the franchise record for most extra-inning wins in a season (15, also in 1943). Eight of those have come on the road.

This is the first time the Red Sox have won 7 consecutive extra-inning games in a season since 1972 (also 7).

So, if an important game down the stretch or in October needs more than the usual nine innings, you have to feel pretty good about Boston’s chances. It has, after all, thrived in extra frames for most of the season.

Let’s take a look at a few more notes from Red Sox-Orioles.

— Carson Smith has put up some solid numbers since returning to the Red Sox bullpen in early September following his recovery from Tommy John surgery.

The right-handed reliever hasn’t allowed a run in 3 2/3 innings, and he earned a save Monday night in his fourth appearance out of the bullpen.

And the day after that save, Farrell talked about his chances of making the postseason roster.

“I think it’s very possible,” Farrell said, via WEEI.com. “The more outings like last night, that was a very powerful inning. That was a very good inning. Particularly against a very productive, right-handed hitting lineup that handles right-handed pitching well. That late action putting the ball on the ground is pivotal.”

He added: “Last night was by far his best. Just the overall command, and the consistent location, and the power to his stuff. That was pretty close to where he was pre-surgery. That was a really good outing last night.”

— The Red Sox apparently will get a few reinforcements Wednesday night in their series finale against the Baltimore Orioles.

Farrell told reporters prior to Tuesday’s game that second baseman Dustin Pedroia, who fouled a pitch off his face Monday, and Hanley Ramirez, who’s missed roughly a week with a biceps injury, both could be back in the lineup Wednesday.

Farrell said Pedroia and Ramirez are likely to be in the lineup tomorrow. Travis will get back-to-back starts here too.

— In the interesting stats category, this was Boston’s first ever extra-inning win without an RBI, according to ESPN after the game. It also is the club’s first 1-0 win this season. 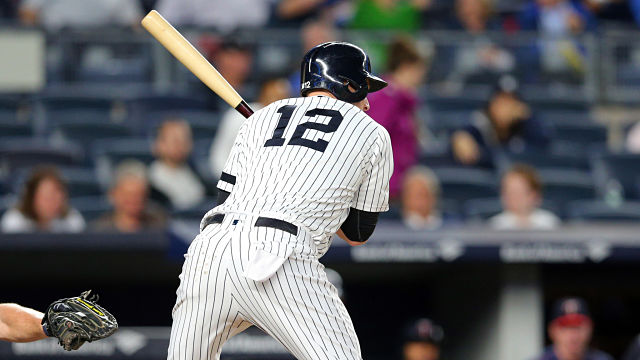 Watch Yankees’ Chase Headley Get Hit In Groin By Fastball Vs. Twins 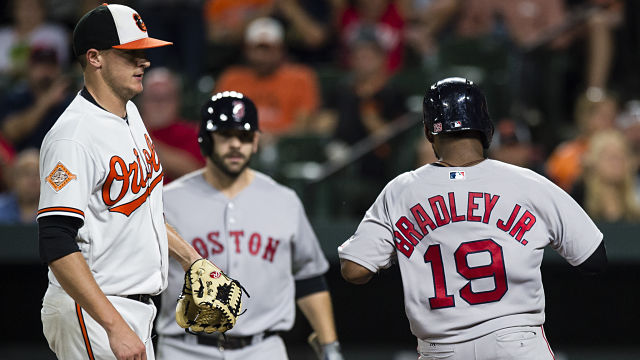