How Patriots' Joint Practices Showed New England That Jaguars Were For Real - NESN.com Skip to content

FOXBORO, Mass. — In a way, the first team the New England Patriots played this season is the same one they’ll host this Sunday in the AFC Championship Game.

During the second week of August, the Jacksonville Jaguars came to town for three joint practices with the Patriots, followed by the preseason opener for both teams at Gillette Stadium.

The Jaguars recently had undergone a management change — longtime New England nemesis Tom Coughlin was hired as executive vice president of football operations, tasked with turning around a squad that finished 3-13 in 2016 — and had loaded up their roster, signing high-priced free agents like defensive end Calais Campbell and cornerback A.J. Bouye and drafting star running back Leonard Fournette fourth overall.

Immediately, the Patriots noticed a change. This was a different breed of Jags.

With Coughlin (and head coach Doug Marrone) running the show, the Jaguars practiced with more purpose and focus. At the first joint practice, nearly the entire Jacksonville team was on the field a full 15 minutes before the session officially began.

That left an impression on their hosts.

“Obviously, I would say it?s a change of mood,” Harmon said. “Talking to a couple guys when they came up here, they said their practices were a lot different, a lot harder. They were grinding harder. They were grinding different. A lot of things changed, and obviously, that change has put them in the right direction. It?s got them playing great football, and that?s the reason why they?re here right now.”

“They play hard,” offensive tackle Nate Solder added. “They?re very talented. The way that they practiced was hard, so you know that they?re going to improve and get better, and that?s what they?ve done, and that?s what we have to perform against.”

After a 3-3 start to the season, the Jaguars won seven of their next eight games to lock up an AFC South title and their first playoff berth since 2007. They grinded out a 10-3 win over the Buffalo Bills in the wild-card round, then went on the road and stunned the Pittsburgh Steelers, winning 45-42 in a barnburner at Heinz Field. Now, they’re one win away from the first Super Bowl appearance in franchise history.

“This is an elite football team,” said Patriots special teams captain Matthew Slater, who used the “e” word multiple times Monday to describe the Jaguars, “and I think when we left here in the summer after going against them in the joint practice, we saw these guys (were) going to be good. They?ve proven it all year long, and this will be the best football team that we?ve played all season long.”

Those few days together on the practice field gave the Patriots a preview of what was to come in Jacksonville. But from an actual game-planning perspective, the Patriots won’t take much from that week.

Training camp was, in Slater’s words, “eons ago,” and the rosters of both teams now look substantially different. Campbell and All-Pro cornerback Jalen Ramsey, for instance, didn’t practice for the Jaguars while they were in Foxboro, and top wide receiver Allen Robinson was lost for the season after tearing his ACL in Week 1

Speaking of ACL tears, the Patriots have been without their own top receiver, Julian Edelman, since Week 3 of the preseason and have lost several important role players since camp, as well. There’s also the obvious fact that more than 70 of the guys who were on the field in those joint practices failed to earn roster spots.

“I don’t think it’s really smart to base everything off of something that happened in August,” Patriots coach Bill Belichick said. “A lot of water under the bridge since then.”

All that being said, we’ll leave you with one potential matchup to watch this weekend. Jaguars defensive end Yannick Ngakoue, who had 12 sacks during the regular season, dominated in joint practice, especially against Patriots tackle Cameron Fleming. With Marcus Cannon on injured reserve and LaAdrian Waddle nursing a knee injury, Fleming might be New England’s starting right tackle on Sunday. 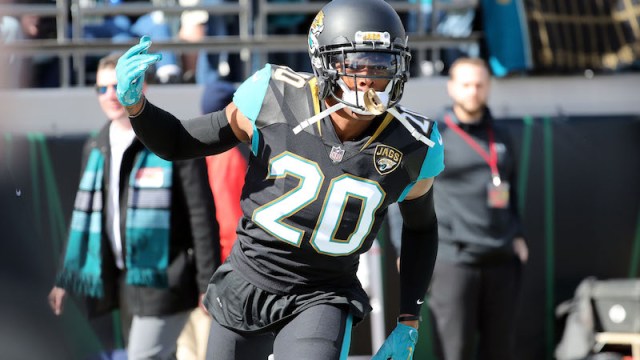