Dallas Goedert is one of the top tight end prospects in the 2018 NFL Draft class. He’s also a Rob Gronkowski superfan.

During his meeting with reporters Friday at the NFL Scouting Combine, Goedert heaped praise on Gronkowski, explaining why the New England Patriots star is his favorite NFL tight end.

“He?s a true three-down tight end,” the South Dakota State product told reporters in Indianapolis. “He does it all. He never gets off the field. And that?s just so invaluable to a team.”

And Goedert didn’t stop there.

“(Gronkowski is) an unbelievable athlete,” he later added. “His speed and his size, not a lot of people have that. He does a great job. He?s a fierce competitor. I love everything I see him do. When he?s running routes, he?s going to get the ball every time. He has that attitude about him (that) I think I have, as well. He?s going to beat you no matter what. You see him driving people to the sideline into the cameras. It?s just incredible to watch his mentality, and I think I have the same thing.”

There’s a chance Goedert could wind up playing alongside his NFL idol. Even if Gronkowski does not retire this offseason — he’s reportedly expected to play in 2018 — the Patriots could stand to add another talented tight end to their roster, especially if they choose to cut ties with Martellus Bennett and/or Dwayne Allen this spring.

Goedert made a name for himself at the FCS level for himself by hauling in highlight-reel catches. He entered combine week second in NFL Media draft expert Mike Mayock’s tight end rankings behind South Carolina’s Hayden Hurst and should be available in the second round. 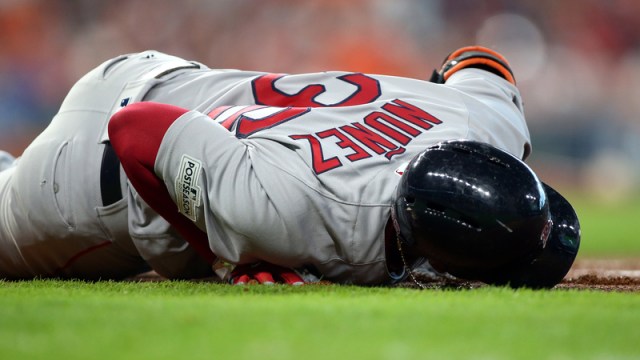