The New England Patriots had a predictably unpredictable 2018 NFL Draft that left fans with more questions than answers.

Let’s get straight into them in this week’s mailbag.

Who makes the bigger impact Year 1: Michel or Wynn?
— @zbaronner17
I’m going with Isaiah Wynn. After spending the 23rd overall pick on Wynn, I can’t imagine the offensive lineman not starting somewhere in 2018. I think the most likely scenario is he starts at left tackle. But at just 6-foot-3, there is a chance he won’t translate to that position in the pros because of a lack of length.

But if he can’t start at left tackle, then I assume he would take over the left guard spot. That would mean either Joe Thuney or David Andrews heading to the bench. Thuney — a 2016 third-round pick — can play center, but Andrews was a better overall player in 2017.

Brown also can play guard, so even if Wynn doesn’t move from tackle, Thuney’s starting role could still be in jeopardy. Patriots director of player personnel Nick Caserio said the Patriots will put the best five offensive linemen on the field. Is Brown better than Thuney? We’ll find out this summer.

By the way, this is a make-or-break year for many of the Patriots’ 2016 draft picks. Here’s the entire class:

Jones missed all of 2017 with a torn ACL and is fighting for a roster spot. If the season started today, it would be safe to assume Stephon Gilmore, Jason McCourty, Eric Rowe, Jonathan Jones and Duke Dawson would be the Patriots’ five cornerbacks. Jones is competing with Keivon Crossen, Ryan Lewis, JC Jackson, Jomal Wiltz and A.J. Moore to convince the Patriots to keep a sixth cornerback.

Thuney could potentially lose his starting job at left guard.

Brissett was traded to the Indianapolis Colts for wide receiver Phillip Dorsett.

Valentine missed all of 2017 with a knee injury and is fighting for a roster spot.

Mitchell missed all of 2017 with a knee injury and is fighting for a roster spot.

Grugier-Hill never made it out of training camp.

Roberts is fighting for a roster spot. The Patriots took two linebackers in the 2018 NFL Draft.

Karras is fighting for a roster spot.

Lucien is no longer a member of the Patriots.

If all goes well, then Jones locks down the slot cornerback and punt returner role, Thuney stays at left guard, Valentine enters the rotation at defensive tackle, Mitchell is fully healthy and mans the third receiver position, Roberts takes another step forward at middle linebacker and Karras sticks as the Patriots’ top interior line backup.

Which RB currently rostered leads the Pats in touches in 2018?
— @GodfatherAlmada
Despite the above answer, I’m still going with 31st overall pick Sony Michel. I think he’s the “starter” while James White serves as the third-down back and Rex Burkhead fills in on first, second and third down, plays special teams and possibly takes on the goal-line role.

What are some predictions for Sony Michel stats wise
— @MihirD0680
Laurence Maroney, who never lived up to his potential, had 175 carries for 745 yards and six touchdowns with 22 catches for 194 yards with one touchdown in 2006 as a rookie.

I’ll confidently guess Michel’s season-end stats will be slightly better than those. One would hope so, at least.

Is Ryan Allen’s job in jeopardy?
— @EddieHicksOG
The Patriots brought in two punters to try out at rookie minicamp. Until the Patriots actually sign one of those players, then no. Allen is entering the final year of his contract, so it makes sense to bring in some competition.

I wouldn’t be shocked if Trent Brown entered the equation, though. I rewatched his game against the Arizona Cardinals in which he started at left tackle and really liked what I saw.

Out of all the undrafted free agents, who’s your early guess that makes the team?
— @bostonfandom5
There’s no clearcut choice. The Patriots brought in a running back, wide receiver, tight end, two defensive tackles and two cornerbacks. The competition is fierce at all of those positions.

My guess would be either cornerback JC Jackson, because he’s the most talented, or tight end Shane Wimann, because there room to crack the roster at that position.

#maildoug could the limited D help mean more trades for guys like mychael Kendricks?
— @Andrew__Butts
I think Mychal Kendricks has been in trade rumors since Ricky Watters was still on the Eagles.

The problem is Kendricks’ $5.85 million salary is prohibitive. The Patriots could add him if he’s released.

And the Patriots will probably make more trades for veteran players, especially with so many 2019 draft picks. It might not happen until late August or early September, though.

Who?s going to be the no. 2 tight end behind Gronk?
— @jonothorpejazz
This is probably worth its own post. Current guess would be Dwayne Allen, but it could be anyone.

Do you believe that the Pats were truly interested in trading up for Mayfield at pick 2? A follow up to that, if you were willing to grab a QB at pick 2, why wait until pick 219 to snag Etling? #MailDoug
— @coach_pat13
I do. Of course, it’s possible the Patriots wanted to meet with Baker Mayfield and said they’d be willing to trade up to No. 2 overall while knowing the New York Giants would never part with the pick.

And why wait? I don’t think the Patriots liked the value of any quarterbacks with the picks they had. So, they waited until the end of the draft to take a guy with potential upside. Danny Etling wasn’t good in college, but he’s been working with Tom Brady’s throwing coach, Tom House, to fix his mechanics. He could come in like a new quarterback.

How does the value of resources Pats have devoted to T position last 2 years (2017 3rd Rd pick, 2018 1st Rd pick, 2018 3rd Rd pick and salary in Brown trade, Waddle resigning) compare to the option of giving Solder the deal he got from the Giants?
— @reallyrlreviews
Well, it’s tough to pit value of draft picks vs. a contract.

In total, the contracts of Wynn, Garcia, Brown and Waddle will equal roughly $16.1 million if they stay on the team for the entirety of their contracts. Solder’s contract is worth $62 million total and $34.8 million guaranteed.

Yes, the Patriots gave up first-, third- and the equivalent of a fourth-round pick to acquire players to potentially fill in for Solder, but those players also have value at other positions or as backups. It’s not like those resources were wasted if the players don’t start at left tackle.

Is ketchup actually bad?
— @EricRHenderson
No, but it’s kind of overrated.

I’ll have ketchup on a hot dog or hamburger, but I’m not looking to dip my fries in ketchup.

I have complex feelings on condiments. I like a good garlic aioli, but I dislike mayo. I’ll say that.

Made a bet with a classmate that Brady plays for 5 more years counting 2018, thoughts? I buy the TB12 method in terms of results. #MailDoug
— @StephenPorier
He got Gisele to agree to two more years. I’m not sure if he can tack on three more.

I would suggest cutting all ties with that classmate within the next five years unless you’re right.

#maildoug Was your head wound a transparent attempt to cull sympathy from your followers or an indication of your hard care “do you job” mentality about covering the Patriots?
— @MrQuindazzi
So, I busted my head open after recording a podcast with Zack Cox and MassLive.com’s Kevin Duffy on Monday. There was a weird amount of immediate blood, but then it kinda stopped bleeding. There’s a cut up there, and it still kind of hurts.

I was bending down to pick something up and then smashed my head on the back of a high-top chair. I have no idea how it happened. I blame a lack of sleep. It was a combination of my “do your job” and “no days off” mentalities.

If you need more incentive to listen to this podcast, @DougKyed left the studio with a head wound. pic.twitter.com/1dX3kRsrZu

@DougKyed Guice getting compared to a murderer for playing Fortnite has to be the biggest exaggeration in draft history right? #MailDoug
— @StephenPorier
Yes. It seemed like every prospect at the NFL Scouting Combine talked about playing Fortnite. Why did Derrius Guice get knocked for this?

When is 50vs50 mode in Fortnite coming back?
— @JustinMH90
I don’t know, man. I don’t play Fortnite. I’m not trying to fall in the draft.

#maildoug What would you rate the chances of Edelman starting the year on PUP? ACLs are generally more than 1 year injuries so he’d have some more time to recover and it would ease the log jam at receiver for a bit
— @MrQuindazzi
Very, very low.

What is worse for a QB to have?
a. Bad body language
2. Bad facial expressions
— @DeeepThreat
D. Bad breath.

Who’ll be this years dark horse?
— @praalhans
In what? The Patriots? The NFL?

I’m going with Gronk The Horse.

If he was a decent tackle, why was SF so willing to part with him?
— @johntmitch
That’s the $1.9 million question. The San Francisco 49ers have a 34-year old left tackle, drafted Mike McGlinchey ninth overall and traded away Brown. It seems to have been for non-football reasons. Brown reportedly had trouble staying in shape. He’s very large.

Lunch next Wednesday? #MailDoug
— @TeamCrazyMatt
Sorry, I got a lunch. 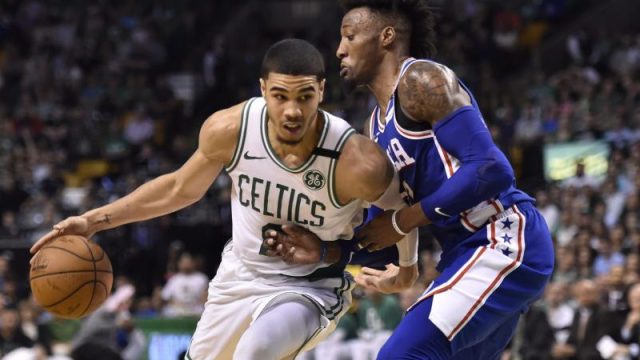 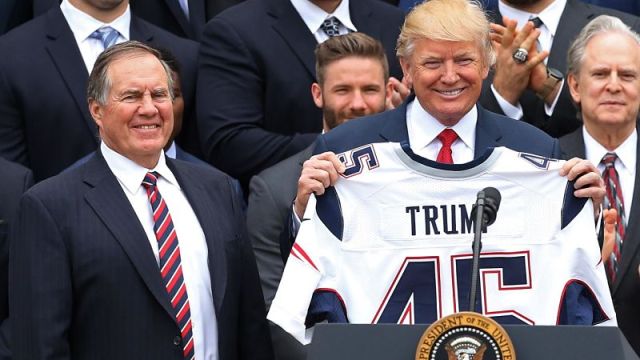