CHICAGO — Some leftover notes and nuggets from Sunday’s wild and crazy New England Patriots game, a 38-31 win over the Bears at Soldier Field:

— The Bears lost despite completing a desperation Hail Mary on the game’s final play.

With no time left on the clock, quarterback Mitchell Trubisky scrambled out of the pocket and launched a deep ball over the outstretched arm of linebacker Kyle Van Noy. Wide receiver Kevin White caught the pass at the Patriots’ 2-yard line but was met by a wall of Patriots defenders — including one wide receiver — that prevented him from crossing the goal line.

Officials blew the play dead as White was driven backward, and the game was over.

What goes into stopping a Hail Mary? A lot, actually, as the players involved explained after the game.

“You can’t prepare for every scenario,” safety Duron Harmon said, “but you can have rules that you can go to that can always put you in a good situation and a good position, and that’s what it was (Sunday). We didn’t go over him catching the ball at the 2-yard line, but we did have rules, and everybody (followed) their rules. We had a jumper, and we had everybody else playing the tip. And you see when everybody does their job, resorts back to their rules and plays by their rules, we get a good play.”

The jumper on the play was wideout Josh Gordon, playing a role usually filled by injured tight end Rob Gronkowski. His job was to launch himself over the receiver and swat the ball away while his teammates look to prevent a ricochet catch.

Gordon lined up near the goal line and received a few quick tips from Harmon, his fellow deep safety. He did the same in the final second of the first half, but Chicago chose not to throw deep in that instance.

“He’s probably one of the best jump-ball receivers in the league, if not the best,” Harmon said. “He had a great jump ball (earlier in the game) on the sideline. I was just telling him to go get the football.”

Gordon, who said it had been “a while” since he’d played on defense, jumped to swat the ball down but couldn’t quite reach it.

“(There were) just too many people around the ball at once to even figure out what’s going on,” he said. “I wanted to grab it. Somebody else wanted to grab it. Pushing and pulling and everything like that. (White) ended up with it. It was a great play for him, definitely. But fortunately enough, we were able to hold them out of the end zone.”

Cornerback Jason McCourty grabbed White’s waist as he hit the ground, but it was Harmon who drove him backward, with safety Devin McCourty arriving to push the pile away from the goal line.

To prevent some last-second trickeration, Harmon even grabbed on to the Bears’ other deep receiver, Taylor Gabriel, who he said was calling for White to pitch him the ball.

“(I was) just doing my job, man,” Harmon said. “My job is to be as deep as the deepest (receiver), not to jump, assess everything, to make sure the ball doesn’t get tipped behind me. White did a good job of going up and getting the football, but I had to make sure I did my job, too, just keeping him out of the end zone (and) making a good, strong tackle. He tried to hand it to Gabriel, but I put my arm around Gabriel too like, ‘Y’all can’t win this one.’ ”

He added: “Gabriel was trying to call for the ball, but I made sure I put my arm around him, too, because, I mean, it’s the last play. Anything can happen. They had the ball right there. The clock on the play was still going, so (I was) just trying to make sure they couldn’t get the ball in the end zone.”

— With tight ends Rob Gronkowski and Jacob Hollister both sidelined with injuries, running back James White turned in another productive pass-catching performance, finishing with eight catches on 10 targets for 57 yards and two touchdowns.

White has caught 45 passes and recorded six receiving touchdowns already this season, making him the first back in NFL history to reach those totals in his team’s first seven games. He’s already surpassed his previous single-season career high for receptions and is on pace to finish with 103, which would be an NFL record for a running back.

— Linebacker Dont’a Hightower, who blocked a punt that Kyle Van Noy returned for a touchdown in the win, held his postgame media scrum directly in front of one of the Patriots locker room’s two exits, resulting in a few funny exchanges with teammates passing by on their way to the bus.

Devin McCourty: ?Take your sunglasses off. You?re inside.?

— Defensive end Adrian Clayborn finally tallied his first sack as a Patriot late in the game after failing twice to bring down the slippery Trubisky, who rushed for 81 yards and a touchdown on six carries.

— It was interesting to see injured rookie linebacker Ja’Whaun Bentley make the trip to Chicago, as he currently is on IR — reportedly with a torn bicep — and is not expected to play again this season.

Bentley, a fifth-round pick in the 2018 NFL Draft, warmed up before the game with inactive players Brian Schwenke and Keionta Davis and practice squad quarterback Danny Etling, who has traveled with the team to each of its three road games.

This is interesting. Rookie linebacker Ja?Whaun Bentley, who?s on IR with a torn bicep, made the trip to Chicago and is warming up with Keionta Davis and Brian Schwenke. Large brace on his right arm. pic.twitter.com/3OzS1zQLM7 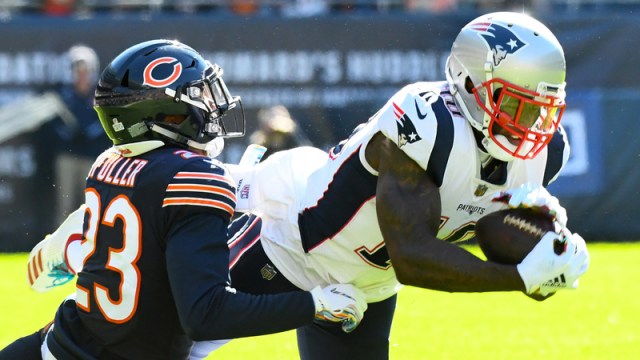