In the 2017 regular season opener, the Kansas City Chiefs rolled into Gillette Stadium and shocked the 65,878 in attendance by cruising to a 42-27 victory over a New England Patriots team some had picked to go 19-0.

This Sunday night, the Chiefs will make a return trip to Foxboro, Mass. And this time, they won’t be surprising anyone.

Led by dynamic first-year starting quarterback Patrick Mahomes and a smorgasbord of offensive weapons, Kansas City sits at 5-0 entering this Week 6 matchup with the 3-2 Patriots, who will be looking to reassert their status as top dogs in the AFC.

INJURY REPORT
Nine Patriots players are listed as questionable for Sunday’s game, all of whom were limited in practice Friday:

Hogan was the only player to miss practice this week, but The Athletic’s Jeff Howe reported he is expected to be cleared to play.

Kansas City also could be without star linebacker Justin Houston (hamstring) and All-Pro strong safety Eric Berry, who has not played since rupturing his Achilles against the Patriots last September. Both are listed as doubtful for Sunday.

Berry’s backup, Eric Murray, has been ruled out, seriously stressing K.C.’s depth in the secondary. Reserve wide receiver Marcus Kemp took practice reps at safety this week and could be forced to make a Matthew Slater-esque cameo there Sunday if the Chiefs lose any more bodies.

Chiefs wide receiver De’Anthony Thomas also has been ruled out after fracturing his leg in practice this week.

PLAYERS TO WATCH
Patrick Mahomes, Chiefs quarterback
Mahomes has been the talk of the NFL this season, leading the league in touchdown passes with 14. The 2017 first-round draft pick has received rave reviews from Patriots players and coaches, who have praised his formidable arm strength and savvy improvisational skills. Mahomes is coming off his worst statistical game of the season, though, throwing two interceptions with no touchdown passes last Sunday in a 30-14 win over the defensively stout Jacksonville Jaguars.

Sony Michel, Patriots running back
Michel’s injury is a bit concerning, especially after all the time he missed with a knee ailment this summer. If he plays, though, the rookie could see another heavy workload against a Chiefs defense that ranks dead last in yards allowed per carry this season. Michel fell two yards shy of his second consecutive 100-yard game last Thursday, finishing with 98 and a touchdown on 18 carries against the Indianapolis Colts. Only Ezekiel Elliott carried the ball more over the last two weeks.

Tyreek Hill, Chiefs wide receiver
Multiple Patriots players agreed this week: Hill is the fastest player in the NFL. He’s been a big-play machine for the Chiefs, tying for second in the NFL with nine catches of 20-plus yards this season and accounting for three of Kansas City’s four longest touchdowns, including a 91-yard punt return and a 58-yard catch-and-run. New England can ill afford a repeat of Hill’s Week 1 performance from last season, when he torched the Pats’ defense for 133 receiving yards and a 75-yard touchdown.

Devin McCourty, Patriots safety
McCourty’s strip/recovery on Colts running back Jordan Wilkins was one of the best plays by a Patriots defender this season, but the safety’s overall performance against Indy left much to be desired. With Patrick Chung likely to shadow Chiefs star tight end Travis Kelce on Sunday, McCourty and his twin brother, cornerback Jason, along with third safety Duron Harmon, could be tasked with containing Hill.

Dee Ford, Chiefs defensive end
The current star of K.C.’s shorthanded defense, Ford has been one of the NFL’s top pass rushers this season. Against the Jaguars, he had had five tackles, three QB hits, one pass breakup and a strip sack before being ejected for taunting in the fourth quarter. Defensive tackle Chris Jones, whom Patriots coach Bill Belichick called “a major force” who “can ruin a game,” deserves attention, as well.

Rob Gronkowski, Patriots tight end
Berry is one of the few players in the NFL capable of neutralizing the Patriots’ All-Pro tight end, and he did just that last September, holding Gronkowski to two catches on six targets for 33 yards. With Berry likely out and the Chiefs’ safety group in shambles, Gronkowski, who hasn’t caught a touchdown pass since Week 1, should have a much greater impact this time around.

Julian Edelman, Patriots wide receiver
Edelman played 70 percent of offensive snaps against the Colts in his return from suspension, catching seven passes on nine targets for 57 yards. And that came after a short week. One would assume he’ll be just as involved this week, if not more so.

BY THE NUMBERS
23-0: The Patriots’ home record since 2001 against starting QBs younger than 25. Mahomes turned 23 last month.

Via @ESPNStatsInfo, a notable stat this week with 23-year-old Patrick Mahomes and the Chiefs coming to town: Patriots are 23-0 at home in regular season since 2001 against under-25 QBs. The list of those QBs: pic.twitter.com/nZg5Uv8ohQ

38: The Patriots’ point total in each of their last two games — wins over the Miami Dolphins and Colts. They’d managed just 30 total over the previous two weeks in losses to the Jaguars and Detroit Lions. Still, Tom Brady and the Patriots’ offense were left wanting more after failing to capitalize on multiple scoring opportunities.

16: The number of 20-plus yard receptions Hill (nine) and Kelce (seven) have between them this season. 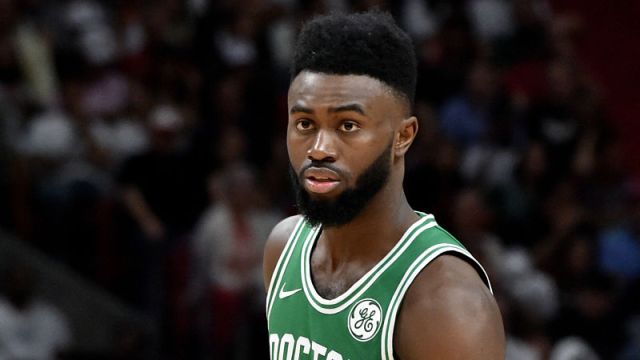 This Stat About Tom Brady, Julian Edelman Is Absolutely Ridiculous