The most wonderful time of the year, the hap- happiest season of all is upon us, and perhaps for a day or two, we can just forget about how much our favorite NFL team sucks.

But we might as well have fun with it, right? As you get settled in and wait for Santa Claus, please accept this gift from us to you: a 1,500-word story with one Christmas movie quote for each and every NFL team. And no, we didn’t save the receipt. Sorry!

Arizona Cardinals — “You give up? Had enough pain?” (Home Alone 2)
Cardinals fans deserve everything on their Christmas list this year for having to put up another dreadful season.

Atlanta Falcons — “Well, they can’t all be winners, can they?” (Bad Santa)
The Falcons couldn’t buy a break all season with injuries on defense eventually catching up to them. Sad!

Baltimore Ravens — “Seeing isn’t believing. Believing is seeing.” (The Santa Clause)
We’re through 16 weeks of the NFL season, and apparently the Ravens — led by their rookie quarterback — are good? Hard to argue with the results up to this point.

Buffalo Bills — ?You guys give up, or are you thirsty for more?? (Home Alone)
The Bills are bad at football, but their fans like drinking. Do you get it?

Carolina Panthers — “I told you, these are the shadows of the things that have been. That they are what they are, do not blame me.” (The Muppets Christmas Carol)
It was another lost season in the midst of the Cam Newton’s career, and the Panthers have some tough roster decisions ahead. That Super Bowl loss feels like forever ago.

Chicago Bears — “It?s Christmas Eve and we are going to go celebrate being young and being alive.” (The Holiday)
The Bears have done an incredible job of building a talented (and very young) roster. That should strike fear in the hearts of the rest of the NFC for years to come.

Cincinnati Bengals — “You need therapy. Many, many years of therapy.” (Bad Santa)
If the Bengals bring back Marvin Lewis after another losing season, they should be institutionalized.

Cleveland Browns — “God bless us, everyone!” (A Christmas Carol)
Rejoice, Cleveland: The Browns have a quarterback and might be good!

Dallas Cowboys — “Oh, life is like that. Sometimes, at the height of our revelries, when our joy is at its zenith, when all is most right with the world, the most unthinkable disasters descend upon us.” (A Christmas Story)
Don’t mind us, just getting ready for the Cowboys’ return to the playoffs.

Denver Broncos — “Can we take a direct flight back to reality, or do we have to change planes in Denver?” (The Santa Clause)
Wait, does John Elway really want to rehire Mike Shanahan?

Detroit Lions  — “They were all very much the same. Nothing ever changed.” (The Muppets Christmas Carol)
So, uh, nope, Matt Patricia could not keep the Lions from sucking, either.

Green Bay Packers — “Hey! If any of you are looking for any last-minute gift ideas for me, I have one. I’d like Frank Shirley, my boss, right here tonight. I want him brought from his happy holiday slumber over there on Melody Lane with all the other rich people and I want him brought right here, with a big ribbon on his head. And I want to look him straight in the eye and I want to tell him what a cheap, lying, no-good, rotten, four-flushing, low-life, snake-licking, dirt-eating, inbred, overstuffed, ignorant, blood-sucking, dog-kissing, brainless, dickless, hopeless, heartless, fat-a**, bug-eyed, stiff-legged, spotty-lipped, worm-headed sack of monkey s*** he is! Hallelujah! Holy s***! Where’s the Tylenol?” (Christmas Vacation)
Now imagine Aaron Rodgers giving this speech … about Mike McCarthy.

Houston Texans — “It’s Christmas Eve. It’s the one night of the year where we all act a little nice: we smile a little more. … For a couple of hours out of the whole year, we are the people that we always hoped we would be.” (Scrooged)
The Texans were left for dead after a 0-3 start, but they’re probably going to win their division and finally looked like a legitimate contender during their impressive nine-game winning streak.

Indianapolis Colts — “We get one day a year to prove we’re not screw-ups, and what do we do? We screw it up.” (Jingle All The Way)
The Colts will have their chance to prove they’re not screw-ups when they take on the Titans in a winner-take-all matchup for an AFC wild card in Week 17.

Jacksonville Jaguars — “You stink. You smell like beef and cheese, you don’t smell like Santa.” (Elf)
Because the Jaguars stink at football, you see.

Kansas City Chiefs — “Let?s do it. Let?s go get the s— kicked out of us by love.” (Love Actually)
The Chiefs will end up locking up the No. 1 seed only to lose in devastating fashion at home in the playoffs because, well, they’re the Chiefs.

Los Angeles Chargers — ?I never thought it was such a bad little tree. It?s not bad at all, really. Maybe it just needs a little love.? (A Charlie Brown Christmas)
It’s been admittedly tough for the Chargers to find love in the StubHub Center, but those who thought Phil Rivers and Co. had the talent to be one of the NFL’s best teams were finally proved right this season.

Los Angeles Rams — “You can be too old for a lot of things, but you?re never too old to be afraid.” (Home Alone)
Maybe the Rams should be afraid, as they enter the playoffs. Todd Gurley is hobbled by a knee injury, and LA has three losses in its last seven games, all against decent to good football teams (New Orleans, Chicago and Philly) — you know, teams they might have to play in the playoffs.

Miami Dolphins — “It is a lamp, you nincompoop, but it?s a Major Award. I won it!? (A Christmas Story)
“The Miami Miracle” might as well be the Dolphins’ Major Award in another otherwise forgettable season.

Minnesota Vikings — “Keep the change, you filthy animal.” (Home Alone)
There’s no way Kirk Cousins’ historic contract gets in the way of the Vikings re-signing some of their best players, right? … right?

New England Patriots — “He rules here. Every night, he searches the entire earth. When he finds a misfit toy, one that no little girl or boy loves, he brings it here to live on his island ’til someone wants it.” (Rudolph The Red-Nosed Reindeer)
This Patriots team doesn’t feel as invincible as they normally do. But the AFC is filled with misfits, and if there’s anyone who can get the most out of his misfits, it’s Bill Belichick.

New Orleans Saints  — “This is my house! I have to defend it!” (Home Alone)
The Saints wrapped up home-field advantage throughout the playoffs meaning they won’t have to play another outdoors game this season. No excuses.

New York Giants — “I don’t know what to say other than it’s Christmas and we’re all in misery.” (Christmas Vacation)
The Giants drafted a stud running back in Saquon Barkley, but they’re still in last place in their division with an aging Eli Manning under center.

New York Jets — “Look around us, Ellen. We’re at the threshold of hell.” (Christmas Vacation)
Might as well rinse and repeat.

Oakland Raiders — “I almost wish there weren?t a holiday season. I know nobody likes me. Why do we have to have a holiday season to emphasize it?” (A Charlie Brown Christmas)
Is anyone willing to take in the Raiders for the 2019 season?

Philadelphia Eagles — “No man is a failure who has friends.” (It’s A Wonderful Life)
The Patriots probably consider the Eagles their friends right now, and if Philly is going to make the playoffs, it’ll need a little help from its friends in Chicago.

Pittsburgh Steelers — “I believe ? I believe. It?s silly, but I believe.” (Miracle On 34th Street)
After spending the last month of the season vomiting eggnog all over themselves, it’s going to take a miracle for the Steelers to reach the playoffs.

San Francisco 49ers — “Strange, isn?t it? Each man?s life touches so many other lives. When he isn?t around he leaves an awful hole, doesn?t he?” (It’s A Wonderful Life)
The 2018 season turned into a big game of “What if … ” after Jimmy Garoppolo tore up his knee.

Tampa Bay Buccaneers — “You guys are nothing but a bunch of sleazy conmen in red suits.” (Jingle All The Way)
The Bucs have the third-most yards in the NFL and a roster with no shortage of talent — yet they’re 5-10. And it’s not like Jameis Winston hasn’t been called sleazy before.

Tennessee Titans — “Every time Catherine revved up the microwave, I’d piss my pants and forget who I was for about half an hour or so.” (Home Alone)
Are the Titans good? Are they bad? Do they even know? We’ll find out in Week 17.

Washington Redskins — “Aaah! “Fra-GEE-leh!” It must be Italian!” (A Christmas Story)
It’s not really their fault, so calling them “fragile” probably isn’t within the Christmas spirit, but this isn’t an easy exercise. But even Santa himself thinks the Redskins’ injury list is long, especially considering Washington is on its fourth starting quarterback. 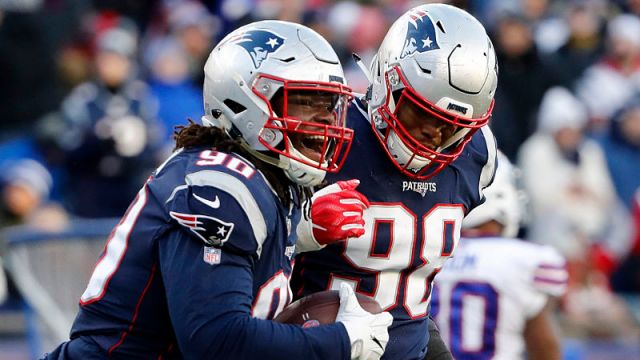