AFC Championship Vs. Chiefs Could Be One Of Coldest Games In Patriots History - NESN.com Skip to content

Think it was cold this weekend at Gillette Stadium? That was nothing compared to the conditions the New England Patriots will face this Sunday when they travel to Kansas City for the AFC Championship Game.

The Weather Channel currently forecasts a high temperature of 15 degrees and a low of 8 for the Patriots’ matchup with the top-seeded Chiefs, and other projections suggest it could be even colder than that at Arrowhead Stadium.

Some model differences for a forecast nearly 7 days out, but any way you slice it…REALLY cold in Kansas City for the Pats-Chiefs game scheduled to start at 5:40 PM on Sunday. #Patriots #Chiefs pic.twitter.com/VvquzHBBeD

Game-time temperature for the Patriots’ 41-28 win over the Los Angeles Chargers in the divisional round was 26 degrees, which, while chillier than any game New England had played this season, didn’t even crack the top 30 coldest games in franchise history.

Occupying the No. 1 spot on that list, according to Pro Football Reference, is a 1989 game in Pittsburgh, which had a kickoff temperature of 3 degrees. The coldest in the Tom Brady/Bill Belichick era was the 2003 divisional-round win over the Tennessee Titans (4 degrees).

The Patriots only have played three games in single-digit temperatures, with the other taking place, coincidentally, in Kansas City way back in 1963 (9 degrees).

The Chiefs, who lost to the Patriots 43-40 in Foxboro, Mass., in Week 6, opened as three-point home favorites in Sunday’s showdown, the winner of which will advance to Super Bowl LIII in Atlanta. 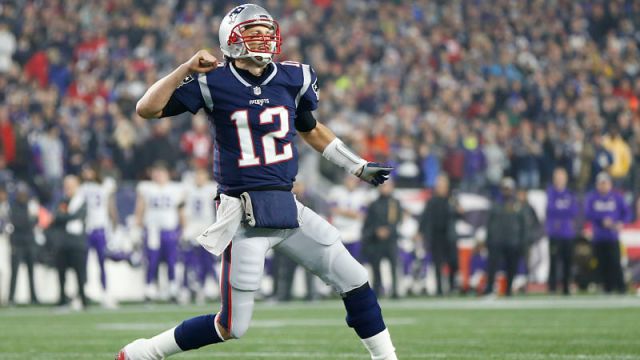