A win is a win, but it’s hard to feel good about this one.

The Boston Celtics blew a 25-point second-half lead against the Atlanta Hawks at TD Garden on Saturday, but eventually prevailed with a 129-120 victory. It was a maddening game, at times highly impressive for Boston, and at others a frustrating reminder of this team’s many warts.

Still, Brad Stevens’ squad was able to shake off a fourth-quarter collapse, and now has won five of its last six games.

Trae Young (26 points on 5-for-8 3-point shooting) was stellar for Atlanta, while John Collins also impressed with 20 points and 11 rebounds.

Ultimately, however, this game was about Marcus Smart. Boston’s emotional leader finished with 16 points, nine assists, five steals, one rebound and a ton of intangible plays.

CELTICS TAKE HIGH-SCORING FIRST
Defense apparently was optional in the first quarter, as Irving and Young went off for their respective teams

Boston ended the frame with a 43-36 advantage, but not before displaying some noticeably iffy defense. In the end, however, Irving (12 points in the frame) was too much for Atlanta to handle.

Take a look at these highlights:

Kyrie races to the rim in transition! ? pic.twitter.com/BsG4PHV78p

Aron Baynes even got in on the action.

Irving wasn’t the only Celtic who played well in the first quarter, though. A total of eight Celtics made it onto the scoresheet, with Brown and Tatum each dropping six points.

Young and Collins both scored nine points in a back-and-forth opening 12 minutes.

BOSTON EXTENDS LEAD
Defense remained a fantasy in the second quarter, but the Celtics did manage to extend their lead, entering the locker room with a 74-62 advantage.

Smart had a great half, logging 10 points on 4-of-5 shooting. It was his trademark “Marcus Smart” plays, however, that really stood out.

Smart's out here making all of the plays ? pic.twitter.com/IBrl6IxExk

Irving and Brown led the way for the Celtics in the first half, finishing with 14 and 13 points, respectively. Tatum and Morris each chipped in with nine points.

The Celtics shot 57.1 percent from the field and 50 percent (7-for-14) from 3-point range. Each team had seven turnovers.

STRONG START, BUT THEN…
The Celtics pushed their lead to over 20 points at multiple points in the third quarter, at one point leading by 25. But Boston struggled in the final three minutes, allowing Atlanta to close the frame trailing by just 13 points.

As has been the case far too often this season, the Celtics played without a sense of urgency when they got a big lead. As a result, the Hawks were able to flip the script, and held all the momentum heading into the fourth.

CELTICS ESCAPE
The Hawks rode their third-quarter momentum into the fourth, riding a 34-9 run all the way until they tied the game at 112 midway through the frame. But Boston rebounded with a 13-2 run to take a 10-point lead in the final three minutes and eventually escaped with the victory.

If it weren’t for these types of plays from Smart, the Celtics likely would’ve lost this game:

Marcus Smart is an animal. pic.twitter.com/p0XoJDIiDr

PLAY OF THE GAME
A reminder of how good the Celtics can be when they play together.

Beautiful ball movement and Brown drains it from the corner! pic.twitter.com/K6sbOa9J66

UP NEXT
The Celtics will return to the court Monday night when they host Isaiah Thomas and the Denver Nuggets. Tip off at TD Garden is set for 7:30 p.m. ET. 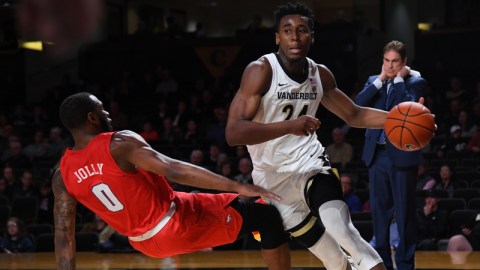