Picking A Wide Receiver For Patriots In Each Round Of 2019 NFL Draft - NESN.com Skip to content

The New England Patriots addressed their clear need at wide receiver Tuesday when they signed Demaryius Thomas. But Thomas, coming off of a torn Achilles that capped an already down season, doesn’t definitively answer the Patriots’ questions at the position.

We expect Bill Belichick to select two wideouts in the 2019 NFL Draft. We also wouldn’t be surprised if the Patriots acquired another veteran player via trade or through free agency.

Leading up to the draft, which runs from April 25-27, we’ll go position by position and draft a player who fits the Patriots in each round. We tackled quarterbacks Monday and running backs Tuesday. Now we’ll focus on wide receivers.

At 6-foot, 226 pounds, Brown has the frame of a running back but the speed, quickness and agility of a slot receiver. He did the majority of his work out of the slot in 2018 but also showed the versatility to line up outside. Given his size and athleticism, we believe he could play the X, Z and slot positions in the Patriots’ offense.

He ran a 4.49-second 40-yard dash with a 7-second three-cone. That’s impressive since he’s the fifth-heaviest receiver in the 2019 draft class.

Campbell is more of a slot playmaker than a refined receiver.

Samuel is another slot receiver with the build of a running back. He’s 5-foot-11, 214 pounds and ran a 4.48-second 40-yard dash, 7.03-second three-cone drill and 4.14-second short shuttle. He returned 42 kicks in college and brought back four of them for touchdowns.

Isabella can play inside or outside and ran a 4.27-second hand-timed 40-yard dash at the NFL Scouting Combine.

Hardman has similar physical traits to Brandin Cooks and Phillip Dorsett with more positional versatility. He did the majority of his work out of the slot in 2019. He ran a 4.33-second 40-yard dash with a 6.75-second three-cone at 5-foot-10, 183 pounds. He also returned punts and kicks.

Sills isn’t quite as good of an athlete as many of these players, but his smarts make up for it. He’s a former quarterback who might be top in his class at reading a defense. At 6-foot-3, 211 pounds, he ran a 6.97-second three-cone with a 4.28-second short shuttle and 37.5-inch vertical leap.

Athletically, McLaurin is nearly a perfect fit for the Patriots.

Folks have been projecting Renfrow to the Patriots since he arrived at Clemson. He’s not a speed demon, but his 6.80-second three-cone drill is a fit for the Patriots.

Guyton would be a project as a perimeter receiver worth the investment for his athleticism.

The Patriots brought in Hurd for a pre-draft visit. He played running back and wide receiver in college at 6-foot-5, 228 pounds. He ran an impressive 4.15-second short shuttle. 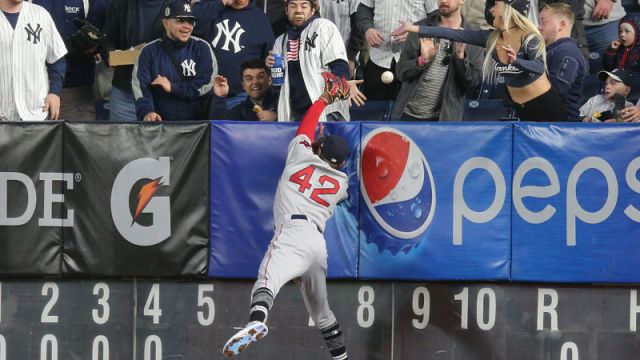 Why Stephen A. Smith Believes Tom Brady Should Be NFL’s Highest-Paid Player