FOXBORO, Mass. — Most perceive the New England Patriots’ offensive playbook to be this unchanged tome since Bill Belichick took over the team in 2000.

The Patriots have had just three offensive coordinators under Belichick in Charlie Weis, Josh McDaniels, Bill O’Brien and a McDaniels redux. But apparently, the offense has changed since tight end Ben Watson left the team in 2009.

Watson is now back with the Patriots after nine seasons away with the Cleveland Browns, New Orleans Saints and Baltimore Ravens.

“It’s quite different, as to be expected,” Watson said Thursday after the Patriots’ first organized team activities session open to the media. “Josh has been here, he’s left, he’s come back. There have been different offensive coaches, different players that have been here, and sometimes you cater to your personnel. So, things might change. The terminology has to change because obviously after time, defenses aren’t dumb. And they pick up on what the quarterback’s saying, so they change. So, offensively, we have to change terms and stuff like that. There are a lot of different terms. There are a lot of different formations, terminology. There’s some carryover, a little bit, but so far it has been a process of learning a lot of new stuff, which is good.”

Most NFL careers last just three seasons. That Watson was drafted by the Patriots in 2004, left after the 2009 season, essentially spent three entire NFL careers on different teams and now is back is nothing short of remarkable. At 38-years-old, he’s the second-oldest player on the Patriots behind quarterback Tom Brady and the fifth-oldest currently signed by an NFL team behind Indianapolis Colts kicker Adam Vinatieri, Brady, Miami Dolphins long snapper John Denney and Saints quarterback Drew Brees.

In those years away from the Patriots, one thing that has stayed constant is the culture.

“That’s not only in the locker room and on the practice field but it’s with the media, it’s with this area of the country. Having played in different areas of the country, there’s just different feels from different fanbases. And so a lot of the culture here is the same. You realize when you go different places that it’s different. It’s not bad or good, but things are just different. That’s something that I think has really helped the team be so successful over the last couple decades.”

Six players remain from Watson’s first tenure with the Patriots: quarterbacks Brady and Brian Hoyer, wide receivers Julian Edelman and Matthew Slater, safety Patrick Chung and kicker Stephen Gostkowski. Hoyer and Chung left and came back to the Patriots. Three of Watson’s former teammates actually were on the field in coaching roles Thursday. Jerod Mayo has taken over as a linebackers coach. Former running back Kevin Faulk and wide receiver Troy Brown also were assisting the staff in OTAs. Mayo came into the NFL four seasons after Watson and already has moved on to life off the field.

That’s what Watson was primed to do after the 2018 season. He actually retired for a stretch before electing to return to New England. He was considering going into the media, working in a player development role or finding a career outside of the sport.

“I was done,” Watson said. “I wasn’t even a free agent. I was done, off the books for a couple months. I was considering other opportunities moving forward to different occupations. And talking to my wife, talking to the kids and family probably right around late April, early May, I started to think, ‘Maybe, let’s just see if there’s an opportunity to play one more year. Once you’re done, you’re done. Maybe there’s an opportunity to do one more.’ And I said I really didn’t want to go — I didn’t want to go to the west coast. I didn’t want to go anywhere crazy. I wanted to go somewhere I knew people, somewhere I felt my family would excel and do well. I would have loved to stay in New Orleans or come somewhere like in New England where I knew people. So, New England offered and reached out and said there was an interest there. We definitely thought it was a good thing. Thought it would be a good fit.”

Watson said he had taken steps toward another career and is still interested in those positions when he’s officially retired. 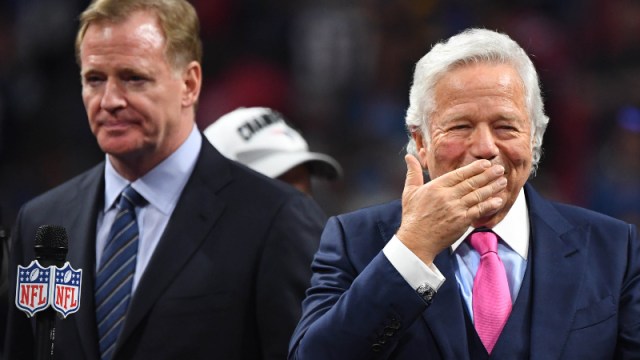