After five organized team activities practices and three minicamp sessions, the New England Patriots are done practicing for the spring.

Bill Belichick canceled the Patriots’ final two OTAs sessions, one of which was scheduled to be open to the media.

Patriots players will depart Gillette Stadium over the next two days and reconvene for training camp in late July. Our best guess for the first day of training camp is July 25.

After watching the four spring practices open to the media, here’s our best guess at a 53-man roster projection.

Stidham was pretty good throughout the spring but not quite good enough for the Patriots to cut Hoyer and keep just two quarterbacks. Etling’s days are numbered after spending more time on the special-teams unit than throwing the football.

Michel and Brossette both didn’t participate in a practice in front of the media. Given the injury histories of Burkhead and Michel, it makes sense to keep five running backs on the roster.

Rookie tight end Andrew Beck also has been working with the fullbacks.

It was tough to cut Berrios and Meyers, but there simply isn’t room on a very competitive roster. Both showed glimmers in minicamp. If they continue to shine in training camp, then this becomes an even more difficult decision.

The Patriots can get by with two tight ends until Watson returns from his four-game suspension. We suspect the Patriots will fill the final spot on their roster with a veteran tight end at some point this summer.

Schwenke was another difficult cut, and assuming one of our 53 players will get injured at some point this summer, we still consider Schwenke a likely inclusion onto the roster. The Patriots can make do with just eight linemen, however, given each player’s versatility.

Here’s how we see the depth chart shaping up:

We had Rivers making the 53-man roster in our second crack, but he didn’t really show anything in minicamp. We also have Shelton over Cowart because we feel the need for a backup, big-bodied nose tackle is greater than another undersized interior defender.

The depth here is pretty impressive since Hall, Munson and Sam all could be in line for roster spots.

We just couldn’t figure out who to cut. The Patriots could elect to move Jones, but trades are difficult to predict. Crossen and Dawson both had impressive moments over the spring, so we don’t really want to cut either player. Gilmore is the Patriots’ best defender, and Jackson and McCourty are competing for starting spots. Williams is a 2019 second-round pick. So, who goes? This might sort itself out with an injury or trade. Or perhaps the Patriots just keep all seven since Crossen and Jones are core special teamers.

We considered taking the easy route and putting Ebner on PUP since he didn’t participate over the spring. But chances are Ebner won’t actually begin the season on PUP even if he starts there during training camp.

I’m less certain about including Bailey over Allen after minicamp. This will be a tough competition all summer. 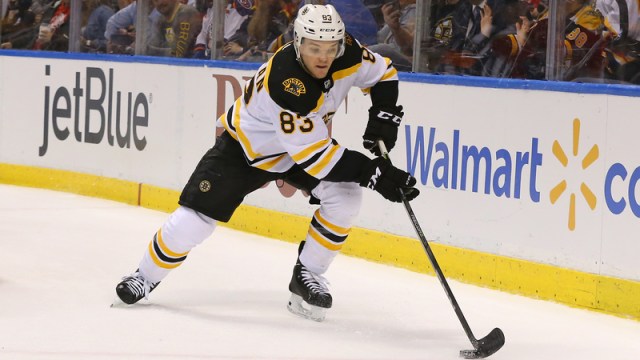 What Bruins’ Karson Kuhlman Was Thinking Before Game 6 Goal Vs. Blues