The No. 4 Ford driver took his second consecutive win at New Hampshire Motor Speedway, defending his race win from last year, as he took the checkered flag in Sunday’s Foxwoods Resort Casino 301.

Last season, Harvick’s win at Loudon was his sixth of the year. This year, it serves as his first, locking into a spot in the playoffs and moving him up to third in the standings.

Harvick took the lead after some strategy paid off after a late caution and held off Denny Hamlin as the two went bumper-to-bumper on the final lap.

STAGE 1
Kyle Busch took an early and, after a tight battle with Brad Keselowski, led 66 laps of the opening 75 to lead at the end of Stage 1.

The No. 18 got out in front early, but was had his hands full trying to hold off Keselowski and Martin Truex Jr., Keselowski re-took the lead on lap 36.

The action is heating up at @NHMS!

NBCSN has coverage of this three-car battle for the lead! pic.twitter.com/q0x8Lj6kUj

Austin Dillon brought out the first caution of the day, getting into the wall in Turn 4 with a flat right-front tire on Lap 46.

Kyle Busch worked his way back in front at the restart, and cruised from there, building up a one-second lead on Erik Jones.

He wins Stage 1 at NHMS, presented by @Kroger #ClickList. pic.twitter.com/YHyphfiYAi

STAGE 2
The second 75 laps brought more action, and more cautions, with the yellow flag flying three times, which allowed Aric Amirola to gain the lead for a stage win.

The caution came out for the third time after Daniel Suarez went up into Daniel Hemric, causing both cars to spin in Turn 2 on Lap 109.

Daniel Suarez and Daniel Hemric get together in turns 1 and 2 at @NHMS! pic.twitter.com/svdyLUyKi3

Take another look at what happened with Daniel Suarez and Daniel Hemric.

Chase Elliott had water pump issues, and Suarez and Hemric were right behind him. pic.twitter.com/EunB2Tj3dg

Things were not green for long as Ricky Stenhouse Jr. made hard contact with the wall coming out of Turn 2 on Lap 136 after contact with Erik Jones cut down his left-front tire.

Hard hit for Ricky @StenhouseJr puts the No. 17 essentially in a must-win situation if they're to make the #NASCARPlayoffs.

The cautions began to pile up, with Truex and Clint Bowyer getting tangled up on the front stretch to bring out the race’s fifth yellow flag on Lap 144.

Clint Bowyer and Martin Truex Jr. get together, and tempers are as hot as the track temps at @NHMS!

That set up a two-lap shootout for the stage finish, with Almirola holding off Joey Logano and Ryan Newman.

STAGE 3
Denny Hamlin made the call to stay out at the stage break on Lap 150, and that move paid off as the No. 11 Toyota led the field for the majority of the race’s final stage.

Kyle Busch found himself in some trouble in Turn 2, loosing the groove and tapping the wall to bring out the caution on Lap 213.

Kyle Busch into the wall at @NHMS!

This race is about to get wild on NBCSN. Stream here: https://t.co/ciKLfM2Z8b pic.twitter.com/IIeUEXDLRx

Kyle Larsen and Alex Bowman then crashed on the restart to bring out the eighth caution of the race.

Hamlin continued to hold a steady lead, sitting more than two seconds ahead of Ryan Blaney with 50 laps to go.

Everything changed when Larson wrecked on Lap 264, scrambling the order as some of the leaders came in, while others stayed out.

Harvick stayed out under yellow with Jones and Truex to take over the top three, with Hamlin falling to fourth despite winning the race off of pit road.

Hamlin worked his way back up to second, setting up a 25-lap race to the checkered flag.

It came down to a two-man race at the finish, with Hamlin getting under Harvick in Turn 2, but Harvick regained the lead down the back stretch and held on through the final turns to take the win.

You have to see this! @KevinHarvick fights off @dennyhamlin to score the victory at @NHMS! pic.twitter.com/4gWJKl7tpN 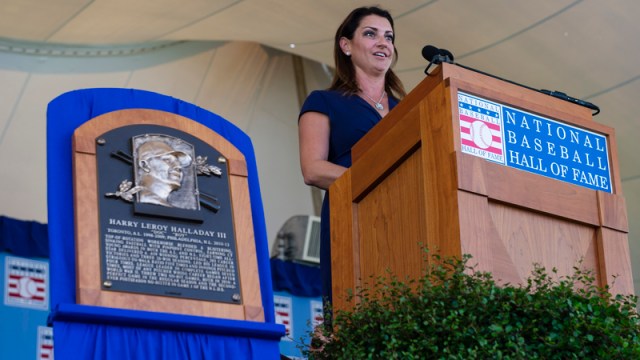 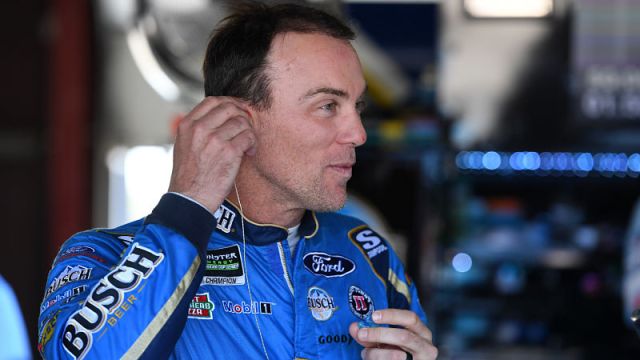