This might come as a surprise, but Rob Parker spent his Monday morning casting doubt on Tom Brady.

Despite the details of Brady’s new contract and his recent real estate decisions, the New England Patriots quarterback still has every intention of playing into his mid-40s. Parker, unsurprisingly, doesn’t see Brady tacking on multiple years to his NFL career. The FOX Sports talking head believes he’s not alone in this expectation, though.

“That’s not gonna happen. Tom Brady threw that number out. He won’t get there — he won’t get to 45,” Parker said on FS1’s “Undisputed.” “Not looking the way I saw him at the second half of last year and in the Super Bowl. … We talked about contracts before. That’s why they gave him that phony $70 million contract. None of the money is guaranteed so that they can get out. When he falls off the cliff this year, they can cut bait and they won’t owe Tom Brady any money. That’s why they have the out, because they don’t believe it.”

The Patriots handing Brady a de facto one-year deal shouldn’t be viewed as a slight to the future Hall of Famer. Brady himself recently admitted he was venturing into “unchartered territory,” and New England obviously would be taking a risk by committing long-term to a 42-year-old. There’s no question the soundest decision for New England is to take it year-by-year with Brady, and if he’s capable of playing at a high level beyond the upcoming season, there’s no reason to believe the sides won’t reach an agreement next offseason.

We have to give Parker credit. Despite being made to look foolish time and time again, his anti-Brady chatter truly is unrelenting. Max Kellerman, meanwhile, expects big things from Brady and the Patriots in 2019. 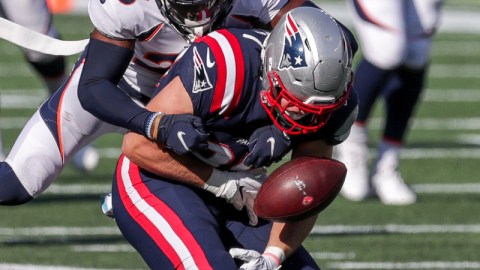