Who Helped Patriots Most In Stifling 43-0 Shutout Win Over Dolphins? - NESN.com Skip to content

MIAMI GARDENS, Fla. — The New England Patriots’ offense has been on fire over the first two weeks of the season. The defense is even better, however.

The Patriots’ defensive dominance dates back to Super Bowl LIII, when they beat the Los Angeles Rams 13-3. The unit hasn’t let up a touchdown since their AFC Championship Game win over the Kansas City Chiefs.

The reigning champions not only didn’t allow a touchdown to the Dolphins on Sunday, shutting out Miami 43-0, but they also scored two themselves. They even overshadowed Antonio Brown in the receiver’s season debut. That’s not easy to do.

Here’s who helped the Patriots most in the Week 2 win:

CB STEPHON GILMORE
Gilmore had a 54-yard pick-six and let up just one 15-yard catch on six targets. He also broke up two passes, one of which led to a Devin McCourty interception.

DTs ADAM BUTLER AND DANNY SHELTON
Butler finished the game with two sacks, while Shelton had one sack and a QB hit. The Patriots generated good pressure up front as Dolphins starting quarterback Ryan Fitzpatrick finished 11-of-21 for 89 yards with three interceptions.

Butler and outside linebackers Kyle Van Noy and John Simon batted passes at the line of scrimmage.

The Patriots also allowed just 42 yards on 15 carries. It was a stifling performance by the Patriots’ defense.

Chase Winovich had another sack later in the game. The Patriots had seven total sacks on the afternoon.

WR ANTONIO BROWN
It wasn’t perfect between Brown and quarterback Tom Brady, but the All-Pro wide receiver certainly showed enough in his Patriots debut. He caught four passes on eight targets for 56 yards with a touchdown. He also carried the ball once for 5 yards.

There were some miscommunication issues that need to be cleaned up between Brady and Brown. But that will come in due time as long as Brown stays off of the commissioner’s exempt and suspension lists.

RB SONY MICHEL
Michel was better in Week 2 than he was in the Patriots’ season opener when he carried the ball 15 times for 14 yards. Michel had 21 carries for 85 yards with a touchdown against the Dolphins, though he also lost a fumble. He still hasn’t been targeted in the passing game. 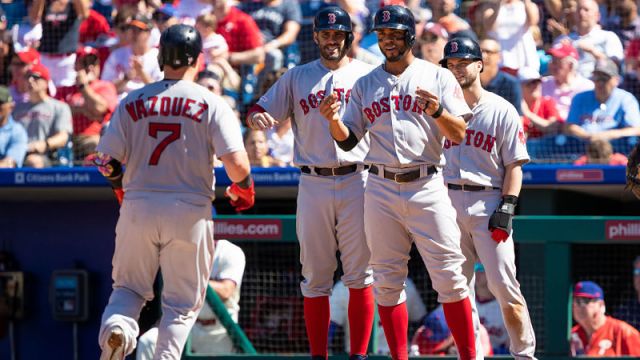 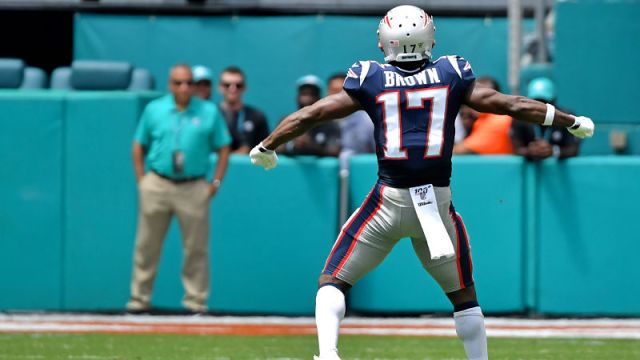