Lauren MacInnis ends BU’s hopes of a repeat with her game-winning goal.

We’re on to double overtime … much like last year.

(Third period, 0.05, 3-3) — Northeastern has a power play after Mackenna Parker gets whistled for interference. Time expires and we’ll go to overtime to decide the winner.

The defending champs tie it with 22 seconds left in the game thanks to last year’s game-winning goalscorer Sammy Davis.

Jess Schryver gives the #HowlinHuskies a 3-2 lead with a power-play goal! Just over 5⃣ to go. pic.twitter.com/z2JtaDuVSx

(Third period, 16:07, 2-2) — Julia Nearis goes to the box for cross-checking and Northeastern gets a power play.

BU holds a 21-17 shot advantage heading into the third.

The Terriers pot a power-play goal off the stick of Abby Cook from the blue line. BU still has 1:53 to go with the extra skater.

(Second period, 9:05, 2-1 Northeastern) — BU will have an extra skater for three more minutes after killing off Breanna Scarpaci’s penalty.

(Second period, 11:05, 2-1 Northeastern) — Fontaine is assessed a five-minute major penalty and game misconduct. She’ll miss the remainder of the game.

(Second period, 11:05, 2-1 Northeastern) — Breanna Scarpaci goes down hard in front of BU’s net after a hard, late hit from Skylar Fontaine. She skates off gingerly to the bench with the team trainer.

Each team is assessed a two-minute penalty, BU for cross-checking and the Huskies for roughing. BU is challenging its penalty.

(Second period, 11:14, 2-1 Northeastern) — Corinne Shroeder makes a crucial stop on a Northeastern breakaway and we’re back to 5-on-5.

SCHROEDS! Corinne makes an unreal save on Alina Mueller to keep us within a goal! pic.twitter.com/z52nUANzQt

(Second period, 13:14, 2-1 Northeastern) — BU goes back to the power play. Skylar Fontaine gets whistled for a trip.

(Second period, 13:27. 2-1 Northeastern) — The Huskies grab their first lead of the night and Chloe Aurard officially is on hat trick watch with her second goal of the game and her 20th of the season.

(First period, 15:05, 1-0 BU) — The Terriers take the lead with a shorthanded unassisted goal from Kristina Schuler after getting through Northeastern traffic to the net.

? on the #HowlinHuskies' lines. pic.twitter.com/XClaMfqzsj

BOSTON — Good evening from Walter Brown Arena where the Boston University Terriers are about to try defending their 2019 Beanpot title against the Northeastern Huskies.

BU shut out the BC Eagles in last week’s semifinal to make it two straight appearances in the final, while Northeastern defeated Harvard.

Keep it here throughout the game for live updates and highlights. 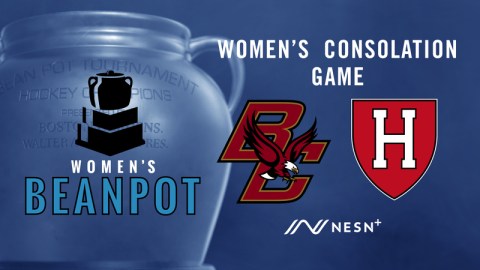