The coronavirus has taken its toll on the sports world with a huge impact on one of the calendar’s biggest events.

Multiple major college basketball conferences canceled their respective postseason tournaments Thursday amid widespread concern over the global pandemic. The NCAA announced Wednesday it was going to go on without fans, but it sure feels more and more like a cancellation of the entire tournament is inevitable.

Among the conferences who announced a cancellation Thursday were the AAC, Atlantic 10, Conference USA, WAC and SEC — to name just a few.

The Big Ten Conference announced today that it will be canceling the remainder of the Big Ten Men’s Basketball Tournament, effective immediately.https://t.co/MeQMNScXKQ

ALERT: Based on the latest developments and the continued spread of the coronavirus (COVID-19), the Southeastern Conference today announced the cancellation of the remainder of the 2020 Men’s Basketball Tournament in Nashville.

A statement on the cancellation of the 2020 Men's Basketball Championship. pic.twitter.com/qfWHYhAy9g

The remainder of the Atlantic 10 Tournament has been canceled.

The WAC has cancelled its conference tournament, per release.

The list seems to be growing by the minute, and the entire sports world is waiting to hear whether the NCAA will call off the tournament, which is slated to begin in earnest a week from Thursday.

MORE: Is NHL about to postpone its season, too? 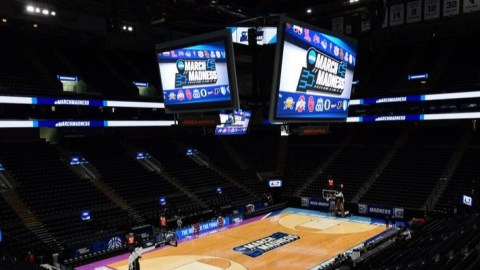