Tom Brady sure has been acting differently since leaving the New England Patriots to sign with the Tampa Bay Buccaneers in free agency this offseason.

This isn’t to say one version of Brady is better than the other — we certainly don’t know what it’ll mean for his performance on the field — but the veteran quarterback has been much more open and outgoing, particularly on social media, which could be a product of not having to worry about Bill Belichick and adhering to the Patriot Way.

“For 20 years, Tom Brady had to live under the rule of and under the thumb of Coach Troll. Bill Belichick was the all-time dictator, tyrant, ogre, the most difficult coach I believe to play for that we’ve ever seen in the National Football League,” Skip Bayless said on Thursday’s episode of “Undisputed” on FS1. “But his quarterback swallowed it and let him get away with it. His quarterback, who was slowly but surely becoming the GOAT, sacrificed his (Tom Brady’s) ego for his (Bill Belichick’s) huge ego. I think it was harder than anybody knew on Tom Brady, but he knew he had to do it for the greater good of the team.

“He had to tell everybody in the locker room, ‘It’s OK. It’s just the way he is. You’ve just got to take the abuse, because in the end, we’re going to win because of the discipline and the dedication and the structure and the culture and all those hard things to live with,’ that even (Rob) Gronkowski is so happy to be free of. As long as the quarterback bought into it for 20 years, great things were going to happen.”

Tom Brady sacrificed his ego in favor of Belichick's for years, but now he?s showing you his other side. He's finally saying ?I'm free.? It's like he's on extended Spring Break in Tampa. More @Undisputed, now on FS1 https://t.co/ou43hWMIO3

Great things absolutely happened, as the Patriots advanced to nine Super Bowls and won six titles in Brady’s 20 seasons with the organization. There’s long been a debate as to whether Brady or Belichick is more responsible for New England’s dynasty, but they achieved amazing success together and it doesn’t appear any mutual respect has been lost despite the sides parting ways in March.

Sometimes, you just need a fresh start. And both Brady and the Patriots have that now ahead of the 2020 season. It’ll be interesting to see how things shake out for both Tampa Bay and New England, which figures to call upon Jarrett Stidham as its new starting quarterback. But Brady seems to be enjoying his new way of life while approaching his 43rd birthday.

“This is like an 18-year-old kid who finally broke free from a horribly strict father and he got to go away to college,” Bayless said. “And he’s out at college, he’s on his own now and he is flexing his GOATish muscles. He’s feeling his social oats. He’s enjoying the fruits of being the GOAT all of a sudden, and he’s going social media wild.

” … I am happy for him because he’s finally saying, ‘I’m free.’ It’s like he’s on extended spring break in Tampa, and it’s fun to watch. He’s found his happiness. He’s riding a wave in Tampa Bay. He’s posting all over Twitter and Instagram, and again, I hope it’s not to the detriment of preparing to play football, but I don’t think it is. I’m happy for him, because I think this man paid prices that we have no idea how severe they were for 20 years under Coach Troll.”

Is this the real Tom Brady? It’s hard to tell, although Shannon Sharpe thinks so.

It definitely is a different Tom Brady. After plenty of sacrifices over the course of two decades in Foxboro, Brady now is letting his hair down a little bit upon arriving in Central Florida.

More NFL: Why The Match Made Pat McAfee Like Tom Brady ‘A Lot More’ 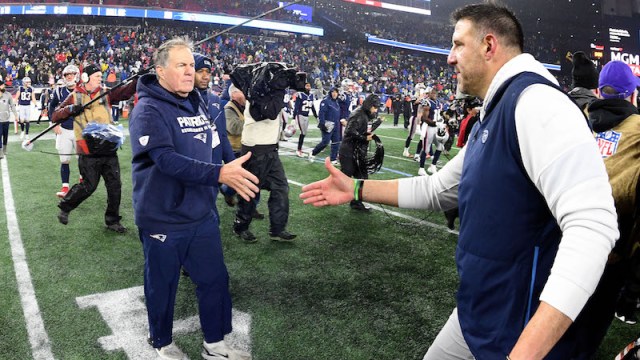