The New England Patriots avoided disaster last week in East Rutherford. Can they pull off an upset Sunday over the heavily favored Baltimore Ravens?

Let’s take a closer look at this primetime matchup:

THE ODDS
The 3-5 Patriots entered the weekend as seven-point home underdogs against the 6-2 Ravens. It’s the first time a New England opponent has been favored by a touchdown or more in Foxboro since 2001 (St. Louis Rams, 8 1/2 points) and just the second time that’s happened in the Bill Belichick era.

Belichick’s squad has been a home ‘dog just five times since Gillette Stadium opened in 2002 and never by more than a field goal. The last such game came in 2014, when the Patriots blew out Peyton Manning’s Denver Broncos as three-point underdogs.

Baltimore dominated when these teams met last November, rushing for 210 yards in a 37-20 romp on “Sunday Night Football.” Beginning with that loss, the Patriots are 7-10 in their last 17 games.

The come-from-behind victory — New England trailed by 10 with just over six minutes remaining — prevented the Patriots’ first five-game skid since 1995.

Some more positives for the Patriots: Quarterback Cam Newton had his most efficient outing of the season (27 of 35, 274 yards, two rushing touchdowns, no turnovers), and the run defense looked significantly better after surrendering 190-plus yards in back-to-back games. Damien Harris and Rex Burkhead both ran well offensively.

The negatives: Joe Flacco and New York’s subpar passing attack shredded New England’s secondary, which has allowed an NFL-worst 8.8 yards per attempt this season. And a three-point win over the Jets isn’t exactly cause for celebration.

The Ravens started slow against the Indianapolis Colts (55 total yards in the first half) but rallied in the final two quarters for a 24-10 win. It was the first time a Lamar Jackson-led Ravens team had won a game after trailing at halftime.

Baltimore is a formidable opponent, to be sure, but John Harbaugh’s squad has not looked as utterly dominant as it did during the 2019 regular season, when the Ravens went 14-2 and boasted the league’s undisputed No. 1 offense (first in points scored, offensive DVOA, run offense DVOA and pass offense DVOA).

While still dangerous, especially on the ground, the 2020 Ravens offense ranks 23rd in DVOA — which measures a unit’s overall efficiency — and 22nd in yards per play.

Baltimore’s defense, though, is allowing just 17.8 points per game, the best mark in the league. That group ranks fifth in DVOA, seventh against the pass and first against the run.

INJURY REPORT
A total of 17 Patriots players are listed as questionable for Sunday:

Gilmore and Harry have missed the last two games. Bentley and Guy sat out last week’s win over the Jets.

Harris, who left the Jets game after taking a shot to the chest, said Friday he’s preparing to play. The Patriots also could have running back Sony Michel at their disposal if they choose to activate him off injured reserve.

With newcomer Jordan Thomas yet to complete his series of COVID-19 tests, Izzo currently is the only tight end on the Patriots’ roster. They do have one on their practice squad in David Wells, however, and could elevate him Sunday if they desire additional depth at that spot.

Ingram, Baltimore’s top back, has missed the last two games and did not practice Thursday or Friday. If he can’t go, J.K. Dobbins and Gus Edwards will handle ball-carrying duties along with Jackson.

Campbell is a significant loss for the Ravens’ defense. He leads them in sacks this season (four), is tied for the team lead in tackles for loss (five) and is Pro Football Focus?s seventh-highest-graded run stopper among interior defenders.

PLAYERS TO WATCH
Jakobi Meyers, Patriots wide receiver
Meyers won’t be sneaking up on anybody this week. After lighting up the Jets for 12 catches and 169 yards, the second-year wideout is squarely on the Ravens’ radar. Harbaugh called defending Meyers a “priority” this week, and Baltimore boasts two talented cornerbacks in Marlon Humphrey and Marcus Peters. (Humphrey is back after missing last week while on the reserve/COVID-19 list.)

Meyers clearly deserves to keep his starting spot in New England’s offense, but it will be interesting to see how Harry’s potential return and Isaiah Ford’s arrival affect the Patriots’ wideout hierarchy.

Lamar Jackson, Ravens quarterback
Jackson’s numbers are down across the board this season, but he remains one of the NFL’s most difficult quarterback to defend.

“I mean, he’s able to take that thing however far he wants to take it,” said safety/linebacker Adrian Phillips, who called Jackson “crazy fast” and “a phenomenal athlete.” “Ninety yards, 100 — if the field was longer, he could take it there, too.”

Baltimore’s offense, though, has not been as devastatingly productive as it was last season, and Jackson himself has voiced concerns about it becoming too predictable. One key for the Patriots’ defense will be keeping Jackson and Co. out of easily convertible third-and-short situations.

Isaiah Ford, Patriots wide receiver
Ford was a full participant in all three practices this week and should make his Patriots debut Sunday night. Acquired from the Miami Dolphins at the trade deadline, the 24-year-old is a smart, versatile wideout who can play both outside and in the slot. He’s very similar to Meyers, actually.

Mark Andrews, Ravens tight end
The Ravens don’t have the NFL’s deepest receiving corps (Marquise Brown is the headliner, followed by Willie Snead, Miles Boykin and rookie Devin Duvernay) but do boast one of the league’s top tight ends in Andrews.

Andrews is tied for third among tight ends in touchdown receptions (five) but has been quiet in Baltimore’s last three games, managing just eight catches on 15 targets for 75 yards and no scores. Expect the Patriots to attack Andrews with some combo of Devin McCourty, Dugger, Brooks and Joejuan Williams.

Isaiah Mack, Patriots defensive tackle
Defensive line depth has been an issue for the Patriots all season. It’ll be interesting to see what Mack, claimed off waivers from the Tennessee Titans’ practice squad last week, brings to that unit. With Guy out, newcomer Carl Davis looked solid last week in his Patriots debut. The Patriots could use all the help they can get up front against a Ravens team that leads the NFL in carries and rushing yards per game.

With Ravens Looking Vulnerable, Can Patriots Pull Off Week 10 Upset? 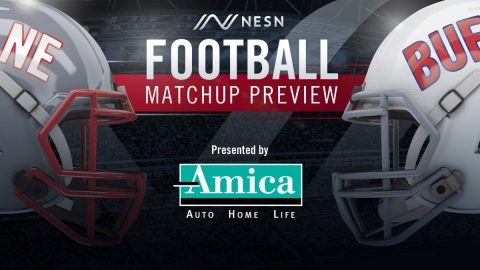