The New England Patriots, for better or worse, have followed Cam Newton’s lead this season.

The quarterback occasionally has been good. But he’s also looked awful at times. And the same can be said of the Patriots in general, as New England enters its Week 12 matchup with the Arizona Cardinals at 4-6 and a far cry from the AFC playoff picture.

This begs the question: Is there any chance Newton, who’s operating under a one-year contract, returns as New England’s starting QB in 2021?

The Patriots’ final six games — and how Newton performs in those contests — could go a long way toward providing the answer, but it feels like a toss-up, at best, as we enter the homestretch. 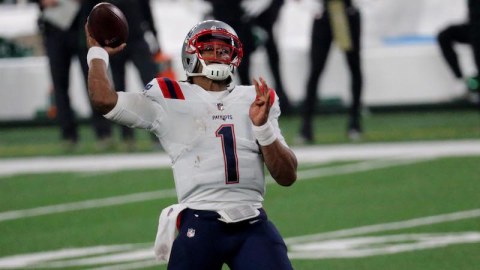 The Athletic’s Mike Sando wrote Friday that coaches and executives are skeptical of the Patriots’ interest in retaining Newton beyond this season.

Here’s the full breakdown from Sando, who evaluated each NFL team’s quarterback future:

Newton started this season decently, fell off after contracting COVID-19, then stabilized in recent weeks. An especially strong finish from him could give New England some incentive to explore continuing the relationship beyond this season, although coaches and execs are skeptical of the Patriots’ interest. Newton, a bargain on a one-year deal worth $1.75 million, has so far avoided the injuries that precipitated his exit from Carolina. Three factors seem relevant to any evaluation: Newton’s physical outlook, the Patriots’ unusually poor supporting cast of receivers and how New England wants to structure its offense for the long term.

It’s fair to assume Newton will explore a raise in free agency. He stated he views his time in New England as a “business trip,” suggesting he’s more focused on performing well this season and getting his career back on track after falling out of favor with the Carolina Panthers than he is on potentially entering into a long-term marriage with the Patriots.

The Pats also have incentive to move on from the 31-year-old. New England’s offense has been stagnant at times with Newton at the helm, and it would behoove Bill Belichick and Co. to find a more sustainable, long-term solution at the quarterback position in wake of Tom Brady’s departure, especially with 2019 fourth-round pick Jarrett Stidham underwhelming in limited action thus far.

There is a path for Newton to return, namely if his market fails to materialize for the second straight offseason and/or the Patriots are unable to uncover a more viable alternative. It just might be Belichick’s second read rather than his primary game plan once the season wraps up.