In the debate for greatest quarterback in NFL history, Tom Brady started playing with house money four years ago.

The fact that Brady, whose Tampa Bay Buccaneers demolished the Kansas City Chiefs 31-9 on Sunday in Super Bowl LV, has now won two Super Bowls since passing Joe Montana and Terry Bradshaw for most titles by a quarterback is downright absurd.

Brady became the undisputed GOAT when the Patriots beat the Atlanta Falcons in Super Bowl LI. He?s just lapping folks at this point.

Brady?s latest triumph doesn?t ultimately mean a thing for his legacy. He was already the Babe Ruth, Michael Jordan and Wayne Gretzky of football. We?re all lucky to watch Brady every time he steps on a football field, and we?ll be telling our grandkids about his accomplishments as some larger-than-life figure. That?s where Brady stands at this point.

Brady is now the only player in NFL history with seven championships. He previously was tied with Fuzzy Thurston, Forrest Gregg and Herb Adderley with six titles apiece.

The Bucs QB is at the point now where he?s competing with players in other sports. We won?t put it past him, but it?s unlikely that Brady is going to catch Yogi Berra (10 World Series titles), Bill Russell (11 NBA championships) or Henri Richard (11 NHL Stanley Cups) by the time he retires. But the QB did just push aside Michael Jordan (six NBA championships) on the all-time team sports championship list.

Brady was fantastic Sunday, completing 21-of-29 passes for 201 yards with three touchdowns. Beating the Chiefs in a Super Bowl is a notch on his belt for the future just in case anyone decides to argue someday that Patrick Mahomes is better than Brady. Head-to-head competition between quarterbacks shouldn’t mean anything. But it’s a closing remark in a debate.

Mahomes went 26-of-49 for 270 yards and no touchdowns with two interceptions.

We?d say that Sunday?s win proves Brady wasn?t simply the beneficiary of the Patriots? ?system,? but anyone who thought that in the first place doesn?t really deserve to be debated with or acknowledged.

Does Brady?s win diminish any of Patriots head coach Bill Belichick?s accomplishments in his six Super Bowl wins alongside the quarterback in New England? No, but this proves Brady can do it without a great head coach.

It certainly makes you question how the Patriots got to the point where they parted ways with Brady in free agency this offseason. Brady wanted to leave. That?s not in question. The reason why Brady wanted to leave in the first place is what needs to be discussed because his seventh title should have come in a Patriots uniform, not red and pewter.

But the QB proved he could carve his own path, and this win prevented the image of Brady in a Bucs uniform being mentioned with the likes of Jordan on the Wizards, Emmitt Smith on the Cardinals, Willie Mays on the Mets or Bobby Orr on the Blackhawks. Brady will always be a Patriots legend. But he?ll have his Bucs era, as well, just like Peyton Manning has his glory days with the Denver Broncos. Brady no longer belongs solely to the Patriots. He?ll forever be shared with Buccaneers fans.

Brady’s not done, either. It wouldn’t surprise anyone if he was right back in the Super Bowl next season with the Buccaneers — and maybe with another team after hitting free agency in 2022. At 43 years old, Brady already should not be accomplishing his current feats. We’ll find out when the magic eventually will run out. But it’s not happening yet. 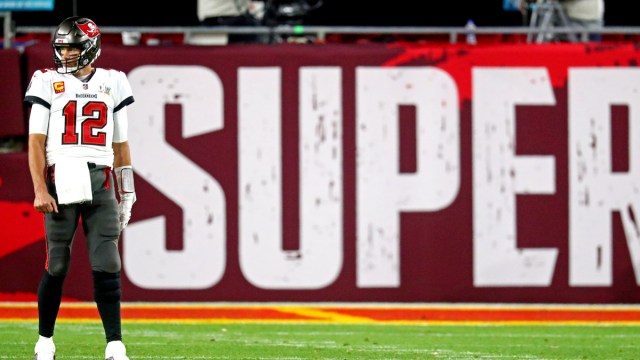 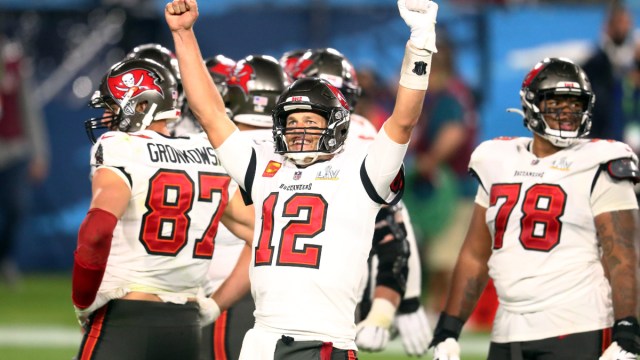