The Boston Bruins are rolling.

The Bruins, who last loss a week ago when they were dismantled by the Capitals, exacted revenge against Washington on Sunday with a 6-3 win at TD Garden. Boston’s win streak now stands at four as the regular season winds down.

Boston’s longtime franchise cornerstones led the way, as the club received two goals apiece from Patrice Bergeron, David Krejci and Brad Marchand. It also was a busy day for Tuukka Rask, who made 30 saves in his second start since returning from injury.

HOT START, LOUSY FINISH
The Bruins found themselves on the man advantage 35 seconds into the game when Dmitry Orlov was flagged for hooking Marchand. But it was the Caps who notched the best scoring opportunity on Boston’s power play, and the home team needed a big save from Rask on a point-blank chance from Lars Eller to keep the game scoreless.

It was Washington’s turn to go a man up roughly 12 minutes later when Connor Clifton caught a double-minor for high sticking. The Capitals dominated possession in the first minute-plus of the power play, but it couldn’t find the back of the net. The same can’t be said for Bergeron, who netted a shorthanded goal with less than a minute to go on Boston’s penalty kill.

The B’s doubled their lead less than two minutes later when Clifton, from a tough angle, delivered a perfect pass to Krejci, who was waiting at the doorstep and easily tapped the puck past Vitek Vanecek.

The Capitals managed to salvage the opening frame with 10 seconds to go before the first intermission. Nicklas Backstrom dangled past Charlie McAvoy and wristed a shot off Rask, and T.J. Oshie cleaned up the rebound after working his way around Mike Reilly.

SECOND-PERIOD SWINGS
Washington wasn’t able to light the lamp on the power play following Clifton’s high-sticking penalty in the first period. But when the Bruins defenseman was whistled for the exact same infraction early in the second, the Caps took advantage not once, but twice.

Oshie’s second goal of the game leveled the score less than four minutes into the period. Rask didn’t really stand a chance against a perfectly spotted wrister from the Caps’ second line right wing.

The visitors jumped out in front just over a minute later when Anthony Mantha beat Rask low, stick side. Mantha, acquired by the Caps at the NHL trade deadline, has scored in all four games he’s played with Washington thus far.

But the Bruins didn’t let the Capitals ride the momentum, as they knotted things back up less than two minutes after Mantha scored. Marchand interfered with a Bergeron pass intended for David Pastrnak, but the left winger made up for it by lifting a backhand past Vanecek.

They say patience is a virtue, and Krejci manifested this notion as he gave the Bruins the lead with roughly four minutes to go in the second. The veteran center received a pass from Craig Smith and waited out a sprawling Orlov before beating Vanecek glove side.

Boston claimed a two-goal lead minutes later. Marchand and Pastrnak couldn’t execute on a two-on-one, but a trailing Bergeron finished the job. The tally marked the 21,000th goal in Bruins franchise history.

FINISHING TOUCHES
The Caps appeared primed to trim the Bruins’ lead to one just over two minutes into the third when Alex Ovechkin skated in on a free path toward net. But Rask denied Washington’s captain as well as Eller, who had a golden opportunity on the rebound.

There was a scary scene midway through the final frame when Garnet Hathaway boarded Jarred Tinordi, who left the ice bloodied. The ejection was not initially made after the hit but was put in place after official review

Washington never really threatened with a comeback and an empty-netter from Marchand put the nail in the Caps’ coffin.

UP NEXT
The Bruins return to game action Tuesday night when they visit the Sabres for the first of three straight tilts in Buffalo. Puck drop from KeyBank Center is set for 6:30 p.m. ET. 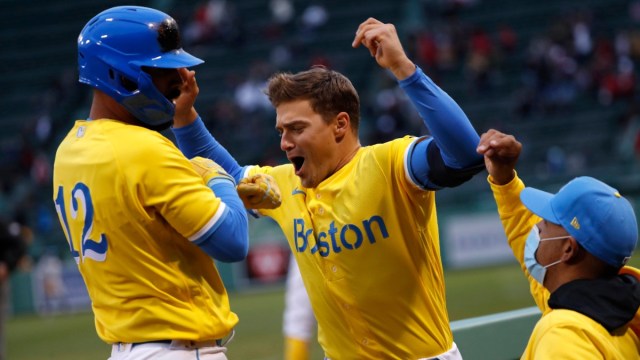 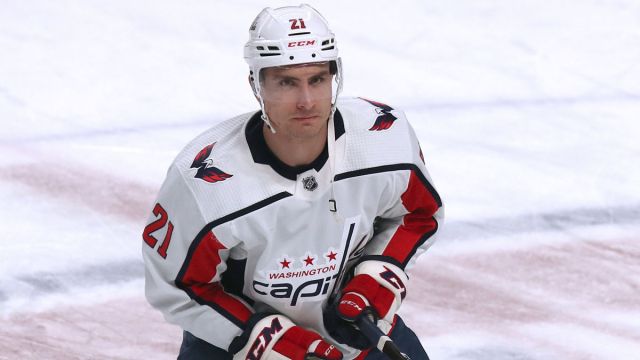