Renfroe made three highlight-reel plays during a three-game series against the Athletics, including a pair of head-scratching throws and an off-balance catch to end Boston’s 8-1 victory Thursday at Fenway Park.

Red Sox manager Alex Cora, for a second straight night, praised Renfroe for his performance in the grass.

“Not too many outfielders go after that ball in a game like that, right? He’s hustling all the way,” Cora said on a postgame video conference, referencing the fact the Red Sox led 8-0 when Renfroe’s assist took place. “That last play was amazing. (When) he’s playing right field, it’s pretty amazing. It’s eye-opening.

“I’ve seen some good ones play here, but this guy, he puts in work,” Cora continued. “You got to see him in batting practice, he’s already shagging, creating angles. Pretty similar to Jackie (Bradley Jr.) when he was here. In centerfield, it was all out, tried to see the angles and what he could do. ? (Renfroe) enjoys playing right field and it’s a pleasure to watch him.”

Renfroe on Thursday recorded his second outfield assist in as many games. It came as he hustled after a seventh-inning hit to the right-field wall and ultimately got Oakland’s Sean Murphy trying to score from first. Renfroe hit Jonathan Arauz with the cutoff throw before Christian Vázquez applied the tag at home for the third out of the frame.

He tracked down an over-the-shoulder catch for the final out of the game, too. It probably would have been more memorable if Boston wasn’t ahead 8-1 at the time it happened, but nevertheless.

Fellow Red Sox infielder Michael Chavis was up close and personal to each of Renfroe’s two plays these last two days, and offered an animated reaction.

“He let that one go last night and I couldn’t believe it,” Chavis said on a postgame video conference. “For the relay I might as well stand on the infield dirt at this point.

“There’s a decent amount of guys that you see with really good arms like that, but I haven?t seen him really miss,” Chavis added. “The dude is unbelievable.”

Renfroe had just hosed Athletics’ Matt Chapman on Wednesday after the third baseman tried to stretch a double into a triple in the second inning. Xander Bogaerts said it reminded him of Mookie Betts after the game.

We have a feeling Renfroe, who now has five assists, could find something gold at the end of the campaign. 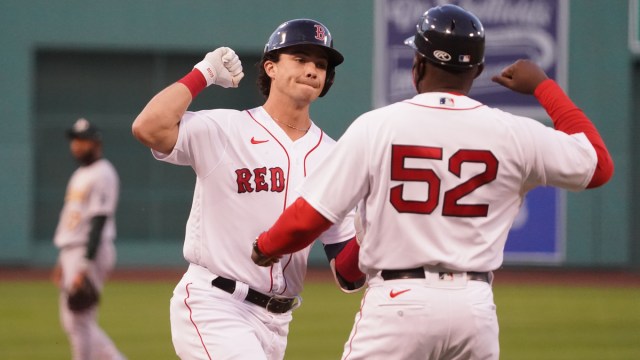 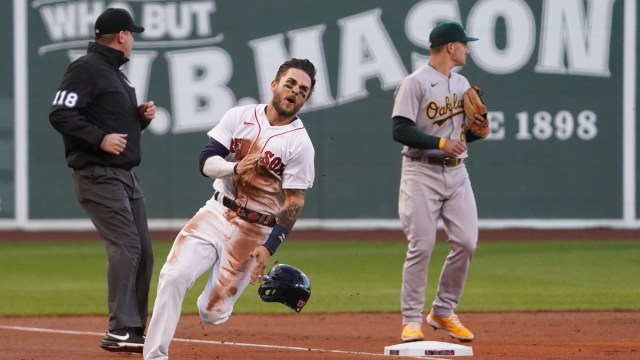