Adam Ottavino was stunned. He admits you could probably tell by his body language.

The Boston Red Sox formerly had a three-run lead in the eighth inning, but with two outs, the New York Yankees worked their way back after the reliever took over for Nathan Eovaldi.

New York won the game 4-3 after a few bloop hits by Brett Gardner, Rougned Odor and Gleyber Torres, allowing the inherited runners to score and then some.

“Feel good about the process, feel terrible about the results,” Ottavino said after the loss. “Results are the only thing that matter. There’s no context to the score of this game. We lost the game. I didn’t get the job done. I’m not gonna make an excuse.

“I think if you see my body language during the game it was probably pretty clear that I was stunned by the whole by the whole ordeal. But then again, it’s just baseball. It’s a cruel game sometimes.”

Ottavino in total threw 13 pitches, eight for strikes, while allowing three hits and two earned runs. Certainly it was one of those games for Boston’s bats, but with how well Eovaldi started the game, the Red Sox would have hoped not to spoil the gem.

“I mean fortunately I was able to get us to where we needed to be with the bullpen and I’m gonna take my chances with those guys every day of the week,” Eovaldi said after the game. “I feel like they’ve done an outstanding job for us and I mean (the Yankees) didn’t necessarily hit the ball hard, you know? They just hit in the right spots and that’s baseball and that’s kind of the things we’ve got to deal with.”

Before the end of his outing, Eovaldi was terrific. The starter pitched 7 2/3 innings, scattering seven hits and no walks for two earned runs. He struck out eight.

Unfortunately, Eovaldi, Ottavino and closer Josh Taylor couldn’t get much run support. Manager Alex Cora emphasized the importance of putting the ball in play after two failed opportunities on offense in the eighth and nine innings.

“It’s a tough one. I mean, that’s baseball right? We always talk about making contact in certain situations. They did,” Cora said.

“That went from two outs, two strikes to a loss, you know? It’s a tough one, but overall, (Eovaldi) was amazing. He was on point.”

Here are other notes from the Red Sox’s loss:

— Boston had a chance in the bottom of the ninth, with two outs and Xander Bogaerts and Rafael Devers in scoring position for the go-ahead runs.

Kiké Hernández, with as hot a bat as anyone else on the league, was one of the players you felt good about taking the at-bat against a struggling Aroldis Chapman.

The Yankees closer not only pitched to Hernández (as opposed to intentionally walking him to instead face rookie Jarren Duran), but struck him out to end the game.

“He made some good pitches, and that’s how it works, you know,” Cora said of Chapman. “That guy, we know how good he is. People go through slumps.”

— After throwing into the second inning Friday night and then leaving the game with a migraine, Eduardo Rodriguez seems to be trending up.

“He feels okay, we’ll see how he feels tomorrow and then we’ll go from there,” Cora said after Saturday’s game. “Obviously, you know, today was a rest day for him. We sent him home, like I said, and hopefully everything goes well tomorrow. That’s our goal and then from there we can map it out for the week.”

Surely the Red Sox will be monitoring the situation closely, with Rodriguez missing the entirety of last season after COVID-19 complications.

— The Tampa Bay Rays will have a chance to pull tie the Red Sox for first place in the division, traveling to Cleveland to take on the Indians and try to move up to first place.

— Sunday seals the deal for the series, as Boston looks to beat New York in a matinee and win the four-game set. First pitch is at 1:10 p.m. ET live on NESN. 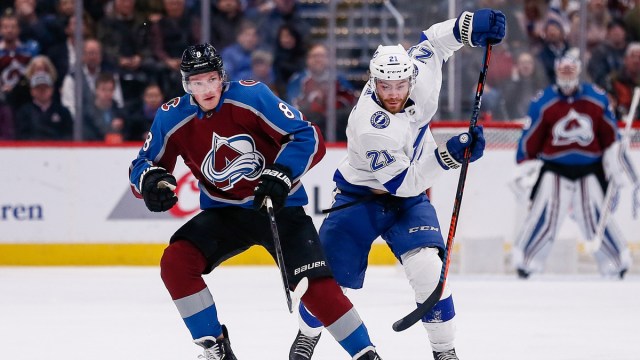