Patriots Snap Count Analysis: Why Brandon Bolden Played So Much Vs. Saints Skip to content

Breaking down snap counts and play percentages from the New England Patriots’ 28-13 loss to the New Orleans Saints on Sunday:

Why did Bolden, who rarely plays outside of the kicking game, outsnap lead back Damien Harris (22 snaps) and second-year backup J.J. Taylor (10) by a wide margin? The answer: pass protection.

Head coach Bill Belichick trusts the veteran Bolden to hold his own in blitz pickup. That evidently is not the case with Harris or Taylor.

“Well, Brandon has by far the most experience of that group and certainly in the situation we were in yesterday,” Belichick explained in his Monday morning video conference. “I thought he did a good job of handling it. That’s been a role that he’s had in the past, and fortunately, we haven’t needed him to do that very often. But when he has, he’s done a pretty good job, and I thought he did a decent job for us (Sunday).

“Being thrown into that situation, he handled a lot of blitz responsibilities and patterns, formation, so forth. (We) ended up being a passing game most of the second half, so I thought he handled it pretty well. But we’ll see going forward.”

Bolden didn’t allow any pressures in his seven pass-blocking snaps, per Pro Football Focus, but he also didn’t offer much as an offensive weapon. His three carries — all deep in Saints territory — went for zero, zero and -1 yards, and he wasn’t targeted in the passing game until the final two minutes, after the Saints already had put the game out of reach. (He finished with three catches for 23 yards.)

Harris logged just two pass-blocking snaps and allowed a sack on one of them. Taylor was not used in pass protection. Rookie Rhamondre Stevenson has been a healthy scratch for the last two games but struggled in that area in Week 1.

If White’s injury is as severe as it looked, the Patriots will need to find some answers here.

This was a brutal game for Smith, who finished with one catch on six targets for 4 yards and had at least two drops, one of which resulted in an interception that was returned for a touchdown. Smith also struggled as a run blocker and was flagged for holding.

— Kendrick Bourne had one of the most productive games of his NFL career, catching six passes on eight targets for 96 yards and New England’s lone touchdown. He played a season-high 55 snaps as the Patriots’ third receiver, up from 33 in Week 1 and 32 in Week 2.

It will be interesting to see how and if N’Keal Harry’s impending return from injured reserve alters the snap distribution among the Patriots’ wideouts. There’s been a clear hierarchy thus far, with Jakobi Meyers playing the most snaps, followed by Nelson Agholor, then Bourne, then Gunner Olszewski.

Meyers, who caught nine passes for 94 yards on Sunday, has played all but 11 offensive snaps this season.

Harry, who suffered a shoulder injury in the Patriots’ second preseason game, is eligible to come off IR this week. Asked whether he will, Belichick said it’s “definitely possible.”

— Yasir Durant played one series at right tackle during the second quarter, but it was mostly Justin Herron in that spot, with starter Trent Brown missing his second straight game with a calf injury. Herron had a tough time against star pass rusher Cameron Jordan, allowing a team-high six pressures, per PFF.

— The Patriots debuted an unorthodox personnel package Sunday, sending out Henry, Smith, Taylor, fullback Jakob Johnson and Olszewski for a handful of snaps. Taylor finished with one carry for 2 yards and two catches for 3 yards.

— After a productive first half, Ja’Whaun Bentley spent most of the second half on the sideline, standing away from New England’s defensive substitutes. Belichick on Monday said the linebacker was dealing with an injury, though the Patriots did not announce one during the game.

— Linebacker Jahlani Tavai played eight defensive snaps in his Patriots debut after being elevated from the practice squad. At times New England had Tavai in the game over longtime starter Dont’a Hightower, who played 68 percent of snaps.

Belichick declined to share an explanation for this decision during his Monday presser.

The Patriots’ three safeties (McCourty, Kyle Dugger and Adrian Phillips) all played at least 92 percent of snaps against New Orleans.

— The Patriots only had 10 players on the field on Taysom Hill’s game-sealing touchdown run late in the fourth quarter. 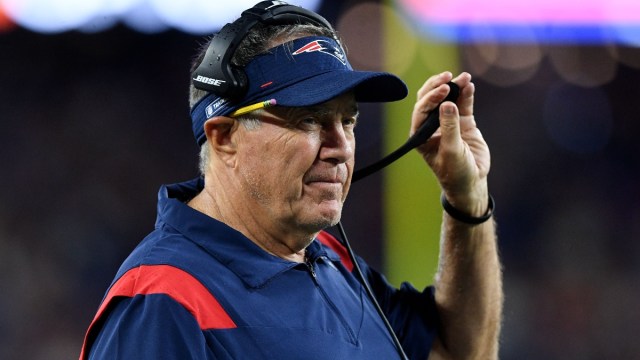