Linus Ullmark on Saturday made his home debut as a member of the Boston Bruins, and it probably did not go as planned as the Bruins fell to the New York Rangers in overtime, 4-3, at TD Garden.

The Bruins held the Rangers to a 3-2 score for much of the game, with all five goals coming in the first period. But New York got an equalizer on a penalty shot in the third period, then Ullmark allowed the winner in overtime.

It wasn’t exactly a forgiving situation, either. Ullmark had total control of the puck in front of the goal, but Alexis Lafrenière got in his lane and intercepted his pass, controlling the rebound into the net.

And while it didn’t count for anything since there was an overtime winner, the Rangers also won the optional shootout.

Overall, Ullmark saved 15 of 19 shots faced in regulation. In his previous outing, also against the Rangers on Tuesday), he saved 11 of 13 shots faced in 30 minutes of action. That’s six goals on 32 shots faced, which accounts for a save percentage of .813.

The veteran didn’t seem too bothered by his most recent showing, taking the opportunity to remind reporters that this is still the preseason.

“It’s the preseason,” he said. “Mistakes happen. Just got to move on from it and learn from it.”

“It’s alright,” he continued. “There’s some things that need to be dealt with obviously. First real game with a new team, there’s always going to be some miscommunications out there. Just got to go back to it and plug away.”

Bruce Cassidy, on the other hand, acknowledged that Ullmark could use some more experience, via Fluto Shinzawa of The Athletic.

“At the end of the day, little bit of a capsule of what cost us the game,” Cassidy told reporters. “We gave up one on the power play as well. We turn it over, we have some good possessions, some good entries, and we just kind of didn’t execute the right play and we lose our awareness a bit. So both the third and the fourth goal are on us to just be a little sharper.”

It’s an interesting conundrum when you consider Ullmark — who spent the first six years of his career with the Buffalo Sabres — was signed to provide a veteran presence for Jeremy Swayman, who was the presumed heir to the goaltending role with Tuukka Rask having undergone hip surgery while entering a contract year.

Swayman, who played in 10 games as a rookie last season, played the full game in Thursday’s victory. He made 16 saves on 18 shots from the Philadelphia Flyers, and was 18-for-19 in a half-game he played against the Washington Capitals on Sept. 26, good for a .918 save percentage.

Sure, Ullmark isn’t wrong. It’s the preseason, and he has seen a game and a half of action against one team. But in a showing where things easily could have tipped the other way, it’s hard not to zero in on what made the difference.

— The Bruins came out firing. They scored two of their three goals with little more than five minutes gone in the game, and their third also came in the opening period.

And while the Rangers got within one before the horn sounded to mark the first intermission, then eventually got the equalizer on a third-period penalty shot followed by the overtime winner, there was one difference between the offenses — the Bruins group never let up.

Boston finished with 36 shots on goal, its most in any of their four preseason games so far. Naturally, the production was led by their top line of Brad Marchand, Patrice Bergeron and David Pastrnak, who were each responsible for goals.

— Charlie McAvoy donned the “A” on his jersey Saturday, an honor previously awarded this preseason to Erik Haula and Tomas Nosek. The Bruins are looking for a new assistant captain this season to replace David Krejci.

— The Bruins now hit the road for a Monday rematch with the Philadelphia Flyers. Puck drop is at 7 p.m. ET and you can watch it live on NESN. 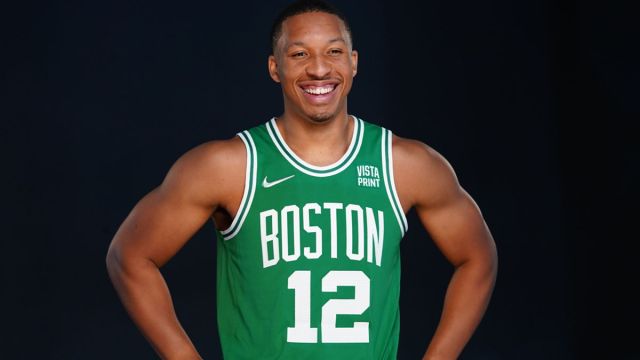