All in all, Tom Brady had himself a great homecoming Sunday night.

Week 4 marked Brady’s first game in New England as a visiting player, as well as his first matchup against the team with whom he spent the first 20 seasons of his NFL career. It obviously was an emotional evening for the legendary quarterback, but he managed to play well enough to help lead Tampa Bay to a 19-17 win.

It was an important victory for the Buccaneers, who would have dropped to .500 with a loss. But the postgame interactions with former coaches and teammates seemingly meant more to Brady in the grand scheme of things.

“If there?s one thing I take from (Sunday) night, I had some questions about what was my experience going to be like,” Brady said on his “Let’s Go!” podcast, as transcribed by WEEI. “I got to see some people after the game that I just love so much. The best part of the night was having the game over and seeing them. And understanding that no matter how we compete, my relationship with those people transcends wins and losses. And yeah we want to win, absolutely. I think the process of trying to win is what’s most important. Winning and losing is icing on the cake, and for the winner. What you have to do as an athlete is you have to put as much as you can into it.

“? The hugs, the handshakes, the congratulatory messages, all the different things that I heard really in the end to me is what continues to motivate me and inspire me.”

Brady was flocked by teammates on the Gillette Stadium turf as the game wrapped up, but his postgame exchanges with old Patriots colleagues weren’t limited to the gridiron. The seven-time Super Bowl champion was sought out by Bill Belichick and Matthew Slater, among others, late Sunday night. 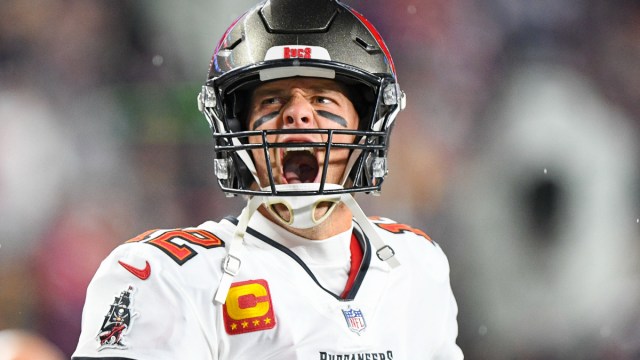