For the second consecutive offseason, the Patriots find themselves in need of a receiver upgrade. And, for the second offseason in a row, Julio Jones is available.

Should New England do what it didn’t do in 2021, and bring the future Hall of Famer to Foxboro?

The Titans reportedly are set to release Jones with a post-June 1 designation, according to multiple reports. Dianna Russini of ESPN was first to report the news, with others providing Tennessee’s projected salary cap savings.

Tennessee made headlines last June when it acquired Jones in a trade with the Falcons. Mike Vrabel and Co. also received a 2023 sixth-round pick but sent two draft picks, including a 2022 second-rounder, to Atlanta. Predictably, the trade did not age well for the Titans.

Jones is one of the best receivers in NFL history, but he showed significant signs of decline in 2020 while also missing seven games due to injuries. That context, along with the likely trade compensation, is why it was hard to make a case for the Patriots extending themselves to add Jones. As you might remember, New England often was floated as a likely landing spot for the once-electrifying wideout.

Well, 2021 went even worse for Jones, who turned 33 in early February.

Appearing in only 10 games, Jones battled injuries, including nagging hamstring issues, throughout the campaign and never looked like his old self. Jones caught just 31 passes for 434 yards and one touchdown and, outside of a 128-yard performance in Week 2, never topped 59 receiving yards.

It would be one thing if Jones were young and coming off a couple of freak-but-minor injuries. However, he’s 33, has dealt with leg problems over the last three seasons and lacks the explosion that made him such a dangerous weapon in the passing game. It’s hard to imagine Jones being anything other than a slow, big target moving forward.

And that’s not what the Patriots need to improve their Mac Jones-led offense. New England needs youth, speed and explosive playmaking ability. Jones was all that and more during his prime, but now he’s not worth more than a cheap, prove-it deal.

That the Patriots have been connected to so many receivers this offseason indicates they’re ready to be aggressive in bolstering their passing game. And that would be a welcome sight, but they also must be responsible.

Adding Jones, at this stage of his career, simply makes little sense. 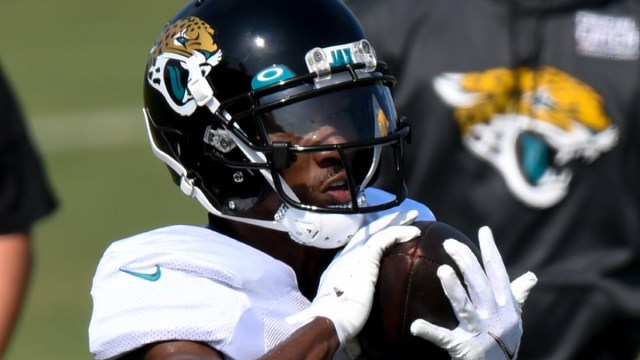