The New England Patriots seemingly landed their next franchise quarterback in Mac Jones with the 15th overall pick in the 2021 NFL Draft.

Jones played admirably in his first professional season, outperforming the four QBs taken ahead of him in Round 1 — Trevor Lawrence (No. 1), Zach Wilson (No. 2), Trey Lance (No. 3) and Justin Fields (No. 11) — en route to finishing second in Offensive Rookie of the Year voting behind Cincinnati Bengals wide receiver Ja’Marr Chase.

But was Jones’ selection the product of savvy drafting by the Patriots or luck?

ESPN’s Joe Buck raised that valid question earlier this week when asked about New England’s Week 7 “Monday Night Football” matchup with the Chicago Bears, which pits Jones against Fields in a classic showdown between up-and-coming signal-callers.

“But I think just to be real quick on my end of it, one thing we’ll never know because he’ll never say, is did Bill Belichick luck into Mac Jones? Did he know that Mac Jones was still going to be there,” Buck asked while speaking with the media alongside his broadcast partner, Troy Aikman, per an ESPN transcript.

“Because all the speculation in that draft was that San Francisco was going to grab him before anybody else with Trey Lance being the pick. And Mac Jones slides down; Bears make the move, they get Fields. New England gets Mac Jones, and Mac Jones was awesome. I mean, handled a lot, and playing for Bill Belichick and what he demands.”

There was plenty of speculation before the 2021 NFL Draft that New England would need to trade up to nab one of the top five quarterbacks available in the class. Chicago traded up from No. 20 to select Fields at No. 11 — after Lawrence, Wilson and Lance came off the board with the first three picks.

The Patriots ultimately stood pat and the dominoes fell in their favor, with Jones lasting until No. 15. But it’s hard not to wonder what kind of intel Belichick and company had at the time, and whether they would’ve regretted their approach if someone chose Jones before New England went on the clock.

All told, the Patriots went 10-7 in Jones’ first season under center, earning an AFC wild-card berth one year after failing to make the playoffs in wake of Tom Brady’s departure. Jones showed intriguing potential in 2021, thanks in large to his leadership, and it’ll be fascinating to see whether he continues on an upward trajectory in his second season despite Josh McDaniels leaving his position as New England’s offensive coordinator to become head coach of the Las Vegas Raiders.

“Second year, as Troy said, change, with no Josh McDaniels,” Buck continued, “but he’s already proven himself to some degree, so you have those two going head to head, and two big markets on a Monday night. Can’t wait.”

The Patriots open their 2022 regular season against the Miami Dolphins on Sept. 11. 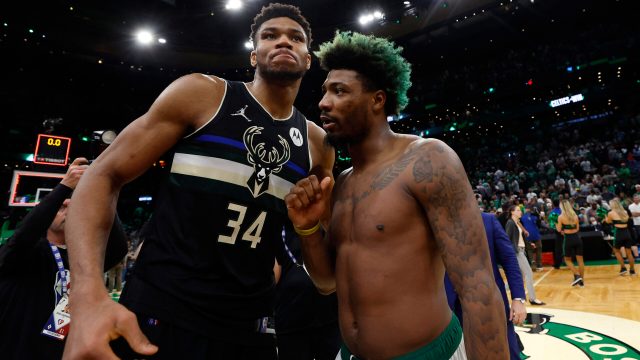 Marcus Smart Upgraded to Probable for Celtics vs. Heat Thursday 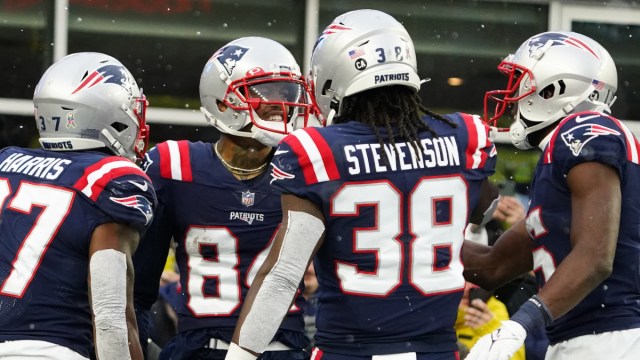