The Red Sox offense was flat Saturday against the Royals, and Boston continued a concerning stat.

Kansas City shutout the Red Sox, 9-0, at Fenway Park behind 15 hits and a solid outing from Brady Singer. Boston had a chance to do some damage against the 26-year-old when it loaded the bases in the bottom of the third inning. However, Tommy Pham popped a ball up on the first pitch, Rafael Devers struck out looking and J.D. Martinez lined out to first to leave all three runners on base.

In the last 12 plate appearances with the bases loaded, the Red Sox are 1-for-11 at the plate with one walk and three strikeouts, along with two balls grounded into a double play. They’ve only scored three runs, leaving 13 runners on base, per NESN’s postgame coverage.

When the Red Sox have had a man on third with less than two outs, Boston is 0-for-8 with one run scored in eight plate appearances in the past six games, according to The Boston Globe’s Alex Speier.

“Top of the order, we put in some good at-bats,” manager Alex Cora told reporters, as seen on NESN’s postgame coverage. “Kiké with a hit, three-two count, and then the walk. (Connor) Wong with the first pitch single, and then Tommy got a pitch he can handle. The slider was a good pitch to hit. He missed it. The kid (Singer) made a pitch on (Devers) with two strikes, he brought it back. And then J.D., he got beat on a fastball but too many those right? We got a chance to cash in there, to get closer to the game, and then we didn’t do it and they kept putting good at-bats and making contact.”

— Saturday was Boston’s fifth shutout loss of the season, and it was the second time allowing more than nine runs in a shutout loss this season since May 30 against the Baltimore Orioles, according to team media relations and baseball communications assistant Raleigh Clark.

— Saturday was also the second consecutive game in which the Red Sox did not record an extra-base hit and the eighth time this season doing so.

— Rich Hill is now tied with Red Sox Hall of Famer Tim Wakefield with the second-most starts for a 42-year-old or older in franchise history with 23, just behind David Wells with 24, according to Red Sox senior manager of media relations and baseball information J.P. Long.

— The Red Sox designated catcher Kevin Plawecki for assignment and added Frank German to the 40-man roster. And it was the right-hander will likely want to forget. The Royals scored four runs off two hits off German, who also walked two batters. German did not record an outing in the sixth inning, and Eduard Bazardo was called upon to close out the inning.

— The Red Sox get another chance to come away with a series win over Kansas City on Sunday. First pitch is scheduled at 1:35 p.m., and you can catch full coverage of the game using NESN 360, along with an hour of pregame. 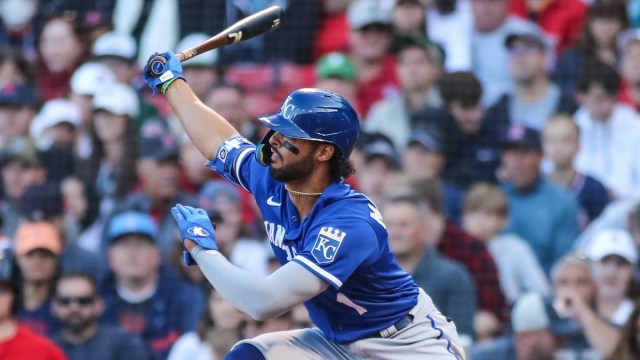 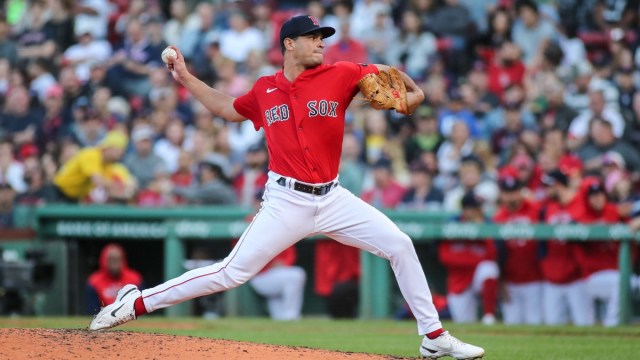 Red Sox’s Frank German Reflects On His Debut Against Royals