One glaring observation through the first week of Patriots training camp is the absence of outside linebacker Derrick Burgess. After signing a one-year, $1.5 million dollar deal to remain with the team in May, Burgess has yet to report to training camp.

It's not a holdout (as say Logan Mankins). It's not a day-to-day situation (see Ron Brace). There's no injury for Burgess.

Reportedly, the 31-year-old veteran is contemplating retirement. Seems like a young age to be pondering the question, but I suppose entering his 10th year in the NFL will cause any player to reevaluate.

At any rate, head coach Bill Belichick offered no insight on the situation during his news conference on Wednesday morning, answering the question about if the two sides were closer on a resolution with a smile, and an "I don't know."

So if Burgess and the Patriots don't sort this thing out, who will be called upon to fill the former Pro Bowler's spot?

Fifth-year linebacker Rob Ninkovich worked alongside Tully Banta-Cain in the early days of camp. Pierre Woods is also a viable candidate for the job. If you ask the head coach, he's high on rookie Jermaine Cunningham and believes he's picking up the playbook quickly.

"That's one thing you gotta be able to do, you gotta pick it up," said Cunningham, when a reporter told him about the head coach's praise. "I'm just coming out here, trying to give it my all, stay in that playbook and come out here and let it translate on the field.

"It's 10 times thicker than a Florida playbook. At first, it's like a foreign language, but you gotta get through it to get better."

The rookie appears to be saying and doing all the right things to earn Belichick's respect. He even may earn himself a starting job, especially if the Burgess saga continues to drag on.

Belichick was also asked about Gary Guyton's versatility at the linebacker position and whether or not he would consider moving Guyton from the inside to outside?

"Gary is a pretty versatile player," Belichick said Wednesday. "I think he can do a lot of different things. He's smart. He's big. He's athletic and runs very well, so he's had a variety of roles for us on regular defense and our sub defenses. I wouldn't rule it out, but he's done well inside. But could he play out there? I think he would be competitive out there."

As per Belichick's policy, no information was revealed as to who will replace Burgess, should the veteran decide to call it quits. But with players on the clock for training camp and Burgess nowhere to be seen, it's safe to say that Belichick is testing just about everyone he's got — including the rookies — as potential replacements. 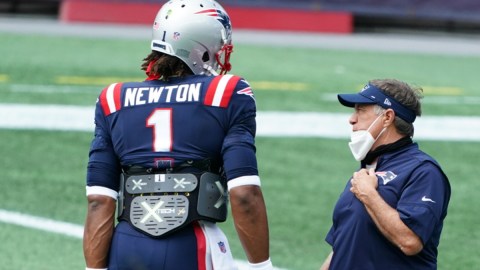