The release of Randy Moss has caused an uproar in the NFL and while (almost) every team would be happy to have him on their offense, clubs will have to abide by waiver wire rules and order should they choose to show interest in signing the future Hall of Famer.

Below are a few key points regarding the NFL waiver wire.

Prior to Sept. 28, the waiver wire goes in the order of the NFL's worst to best team based on the previous season's records. After Sept. 28, however, the waiver wire changes each week based on the current worst and best record in the NFL. Currently, the Bills at 0-7 will get the first crack at Moss. The 6-1 Patriots have the best record in football and therefore, get the last shot at him.

Should he get claimed in the waiver wire, his salary will remain the same: $6.4 million over the remaining nine games.

Should he go unclaimed, Moss would become a restricted free agent and can sign anywhere he chooses. Once a free agent, though, the Vikes would pay him the remainder of his salary and he would then have to negotiate a new contract. 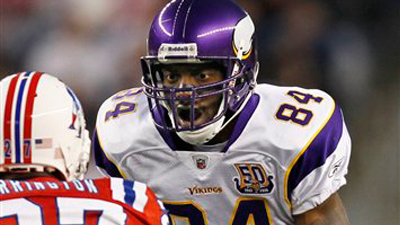 Did Vikings Cut Randy Moss Because He Got Brett Favre Injured?