While some may think Drogba's China move is a mere cash grab, they must realize that there is much more at play than his own personal fortune.

Premier League fans know Drogba as one of the best strikers to ever grace English soccer. His collection of winners' medals (three Premier League titles, four FA Cups, two League cups and one UEFA Champions League titles), the 157 goals he scored in eight seasons at Chelsea FC, and the testimonies of scores of battered defenders earned him a reputation as a "complete" forward.

Drogba's heroics in the last few months of the 2011-12 season made him a hot commodity in the transfer market. For most of the season, Europe's top clubs balked at paying the reported £6 million ($9.6 million) per year he was reportedly seeking. But that changed after he powered Chelsea to victory in club soccer's most prestigious competition. In the end, Drogba decided to leave Europe while he was still on top.

Factors beyond sporting achievment and personal wealth led him to Shanghai. The 34-year-old's iconic status spans the globe, and he is set on using it to score far-reaching goals.

Drogba has been a very rich man ever since his £24 million ($37.9 million) move from French club Olympique Marseille to Chelsea back in 2004. In 2007, he created the Didier Drogba Foundation — a charity that "aims
to provide financial and material support in both health and education to the African people."

He left the bright lights of West London partly because Chelsea was unwilling to offer him a two-year contract. Shanghai Shenhua gave him a two-and-a-half-year deal worth £220,000 per week (around $18 million per year). Drogba has invested some of his personal wealth into the foundation, and that will continue for at least the next 30 months. In fact, it could extend beyond that time frame, as Shanghai Shenhua has promised to support Drogba's foundation. Those assurances were part of the reason he turned down a chance to play for his boyhood hero Diego Maradona (at U.A.E. club Al Wasl), signing with the Chinese club instead.

Drogba's signing does as much for the profile of Chinese sports as it does for his own charity. Chinese fans have tuned in to watch European soccer for years, and many prefer it to the domestic game. They will certainly pay to see Drogba play in person. His signing is nothing short of a transfer coup, as he heads to the Far East while he is still relevant globally. What global stars say and do drive much of the media coverage and consumption. Drogba will break new ground by saying it and doing it from China.

Drogba's decision lifts China's profile as a destination for foreign athletes (and African soccer players in particular). Whatever amount of time he spends in Shanghai will give license to other stars to do the same. While it's doubtful that any of them will have the iconic, almost mythical, status that Drogba enjoys, talented African players will see China as a viable place to find fortune and validation outside of Europe.

For over a decade, China has been active in sub-Saharan Africa. The country has paid for and built a host of infrastructure projects on the continent, and there will be plenty more to come. The economic ties between the two regions are as tight as they have ever been. Drogba's move will only strengthen the social and cultural bonds that exist between the everyday people of both regions. The BBC reports that is one of his goals in moving to China

"I'm looking forward to a new challenge and experiencing a new culture, and am excited about developments in the Chinese Super League," Drogba said. "When Chelsea went to China last year, we had a great time and I met some amazing fans.

"I hope to help promote Chinese football around the world and further improve the links between China and Africa."

He has reached his first goal without even kicking a ball. It's only a matter of time before he hits that second target. Doing so will do a lot of good for a lot of people. 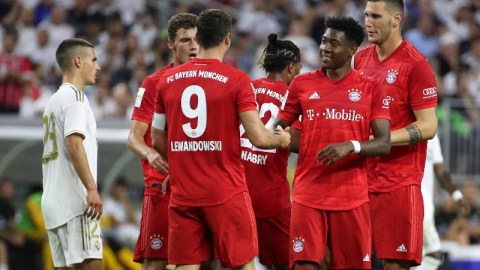