The Red Sox have certainly started to pick it up. After dropping the first game of a weekend set against the Yankees last Friday, the team has ripped off four straight wins and is aiming for a fifth Wednesday night when the Sox go for a sweep against the Tigers.

You really can't say enough about the impact of Adrian Gonzalez's return to form. He's had at least two hits in nine of his 16 games since the All-Star break, and the Red Sox have won seven of those nine. It certainly seems that as Gonzalez goes, so too do the Red Sox — and if he keeps this up, there's no telling the hot streak this team could find itself on.

The picture of the week comes courtesy of Mike Ivins of the Red Sox. It was a real honor to host Jason Varitek's night at Fenway Park, as he was a player I have greatly respected for several years — all the way back to our time together in Pawtucket. Now let's get to the mailbag and your Red Sox questions.

Is Josh Hamilton a good fit for the Red Sox, and should they go after him?
— Rick Goodney

Josh Hamilton is a good fit for any team. It sure seems like he will become a free agent at the end of the year, as the Texas Rangers have not been able to extend him, and I think his contract situation may be part of his recent slumping situation. He is one of the game's top five players in my estimation and has a lot of good years ahead of him. I am not sure the Red Sox will be able to keep Jacoby Ellsbury when he becomes a free agent, so center field at Fenway would be as good as any for Hamilton.

With Pedro Ciriaco's recent surge, should the Red Sox give him a shot at shortstop in place of Mike Aviles, even though Aviles has been solid?
— Dave Gordon

I think Pedro Ciriaco has earned the right to stay on the roster since he is able to move around and play a few different positions. I got the impression that Bobby Valentine would have liked to have had him on his roster all year. Mike Aviles has done a very good job and deserves his spot when his turf toe situation clears up, but in the meantime, Ciriaco will continue to have his chance to prove he belongs. He brings an element that Valentine likes. He can do a lot of different things versatility-wise that many others cannot as the roster is constructed.

How much of a factor was it that Tito spent a little time with the guys in the clubhouse, boosting their spirits?
— Doug Landry Sr.

I think this was overblown to a certain degree. I doubt Terry Francona was cheering them up, trying to help them win games in New York. I think it was more of a manger who had been here for eight years who was reminiscing and catching up with some players and coaches that he was with in the past and had previous relationships with. He has been very careful, in his returns to Fenway or in games he has worked involving the Red Sox, to be respectful of the situation and has gone to great lengths not to be a distraction. I think this interaction was made to be a big deal because of the timing of the gathering being in front of the rest of the media. Many of these type of conversations have taken place at various times around the cage and during batting practice and not in the middle of the clubhouse at Yankee Stadium.

Do the Red Sox have what it takes to at least win the wild card this season if everyone comes back to the roster, full health?
— Billy Wilson

Yes. I think that is why so few deals were made at the deadline. They are very much in it. I had the chance to do the one-game playoff with the Rockies and Padres in 2007 for TBS, and I was around the Rockies players after they had just completed one of the great runs in history to get into the playoffs. The run came out of nowhere, and they ended up, as we know, in the World Series. Since then my view on what is possible has changed. This roster, healthy, is as good as there is if everybody gets on a roll. I am still believing this can happen. Just get to the dance and anything can happen — as the St. Louis Cardinals found out last year.

What are your thoughts on the retirement of Gino Cappelletti?
— Jon Jag Gray

He will be very much missed. Growing up here, I always have felt like I have known him, as many fans do, for years even though we have never met. I feel the same way about Gil Santos. I think they are the two partners that, for whatever reason, I have not crossed paths with in my 12 years in Boston. There is not a more comforting sound on Sunday than hearing Gil and Gino in the fall. I cannot tell you how many times I turned the TV sound down and had them narrate the action. Gino will be missed but not forgotten. 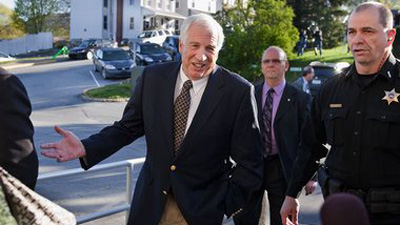