FOXBORO, Mass. — Most, if not all, of New England woke up to a snow surprise on Wednesday morning, and Stevan Ridley made sure he was ready for the inclement weather.

Ridley, who has shown off his unique style in the past by sporting the jumpsuit in the past, was rocking an even more outlandish outfit in lieu of the storm at Gillette Stadium on Wednesday.

Beyond the style of it, though, Ridley said the cold and snowy weather played a big part in his decision to sport the colorful footwear.

“It’s Boston, man,” Ridley said with a laugh and a smile. “This is my stay-warm outfit.”

While chatting with reporters after practice, Ridley was decked out in one of his patented blue jumpsuits but this time it was also accompanied by some impressive footwear — err, moon boots.

Ridley was wearing some rainbow snow boots that resembled something maybe only seen on astronauts before. Yet, as unbelievable the outfit was, Ridley was one of the few, maybe on earth, able to pull it off.

Those boots certainly look like they could keep even an Eskimo warm, so I’m guessing the Mississipi native wasn’t bothered by a breeze and a few flakes.

Take a look at Ridley’s tremendous ensemble in the photos below, and laugh, gasp or just awe in pure amazement. 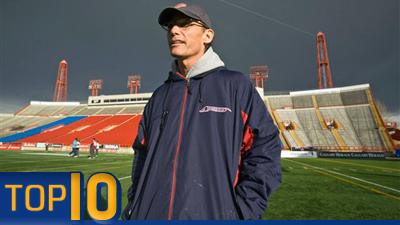