Putting Brad Marchand and Andrew Shaw on the ice at the same time creates a powder keg of agitation — one that finally blew up in the closing seconds of Game 3 on Monday.

As Bruins defenseman Zdeno Chara and Blackhawks winger Bryan Bickell dropped the gloves in front of the Boston net, Marchand and Shaw did the same.

The fights did not exactly follow “hockey code,” as a particularly heated Chara continued to pound Bickell after both had tumbled to the ice and Shaw landed a hard left to Marchand’s dome while the B’s winger lay on his back. That extra blow didn’t bother Marchand — he said he’s done it before, too — but he wasn’t a fan of another dirty trick Shaw allegedly pulled during the scuffle.

“It was a bit of a scrum there in front, and stuff happens in hockey … especially in the playoffs with tempers running high,” Marchand told CSNNE.com on Tuesday. ?When [Chara] is battling with their guy, everybody is going to come in, and things just happen.

“Stuff happens. I?ve [punched a guy on the ice] before. The eye gouge is what I didn?t particularly like, but it?s part of the game. I?ve got a nice little scratch mark on my forehead from the claw marks from the … you know … kitty cat.”

Shaw scored the game-winning goal in triple overtime to give Chicago a 4-3 win in Game 1, but the Bruins responded to take Games 2 and 3. They can take a commanding 3-1 series lead with a win Wednesday night at TD Garden.

Report: Aaron Hernandez ‘Uncooperative’ When Questioned by Police in Murder Probe, But Not Believed to Be Suspect 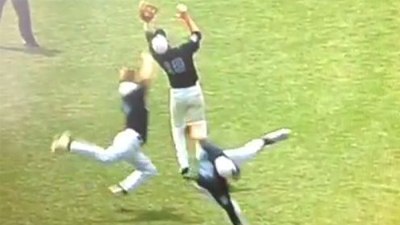